The Winged Prototype was a combat battle suit that was manufactured and utilised by the rebellion lead by Andrew Oikonny against the Cornerian Air Force, massed in battle at Fortuna. Although combat battle suits had already been used by Androssian forces during the Lylat Wars, this particular winged mecha was assumed to be a kind of prototype by Fox McCloud.

While the threat of Oikonny was no longer important during the Aparoid Invasion, another Winged Prototype was encountered outside the space station that Pigma Dengar had fled to. The Prototype was different from before because it had been assimilated by Aparoidedation, yet it was little more than a distraction, since the real focus of the mission was Pigma.

Just after passing the trio blockade of Oikonny's battleships, the Winged Prototype comes out of nowhere and automatically charges up its devastating laser beam to attack Fox's Arwing, which Peppy Hare advises to Barrel Roll to deflect its attack. This enemy can be seen as an introduction to using the techniques effect.

Another Winged Prototype is encountered just after Falco is tailed by Aparoid Flyers outside the space station, where it bursts out of an interior hangar, covered in Aparoidedation. It fights identically to how it did in the first mission but can be destroyed quickly using Hyper Lasers and continual laser fire. When Fox saw it, he first thought it was the one they had encountered at Fortuna.

Fox recognises the prototype despite being infected. 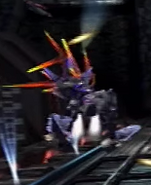 The infected Prototype.
Add a photo to this gallery

Retrieved from "https://starfox.fandom.com/wiki/Winged_Prototype?oldid=47076"
Community content is available under CC-BY-SA unless otherwise noted.