Venomians also known as Androssians are the citizens of Venom who inhabit the planet. Andross himself became a Venomian and their emperor, after his banishment from Corneria by General Pepper. From minor enemy units to end-level bosses and major villains, the Venomians serve as the main antagonists of the Star Fox series, led by Andross and his trusted lieutenants.

Venomians seem to be aggressive to all planetary races, especially their sworn enemies, the Cornerians. The later are frequent targets of Andross's advanced, brutal army. Andross's evil ambition has served as a magnet to attract the scum of the Lylat system into his service. The most powerful and intelligent of his followers have been promoted to positions of leadership in Andross's military machine, and have been given command of specialized war machines of great power. Andross has dispatched these key lieutenants to seize strategic locations throughout the Lylat system. The machines they control come in a variety of shapes and sizes, and are always accompanied by fleets of support craft.

It was primarily believed that, due to the planets harsh conditions, nothing could survive on the surface. This theory was proved wrong when the Lylat Wars began. Under leadership with Andross's great scientific mind, the Venomians became highly advanced in technology and warfare, equal to their Cornerian counterparts and attacked the main territories of the Lylat System. The Cornerians, too overwhelmed to oppose this threat, turned to Team Star Fox for salvation.

Andross's legions of minions had been mustered from sources throughout the Lylat system. From bio-tech enhanced monsters from the abysses of Aquas to mechanized starfighters assembled in Macbeth's weapons labs, Andross's minions had one thing in common: they were expendable. Each fighter pilot was expected to willingly give his life for the emperor, each robot was programmed to destroy or be destroyed, and each mindless bio-tech drone had been conditioned to think only one thought -- destroy Star Fox, or be destroyed. The Star Fox team faced every lieutenant at the end of each mission, defeating them before Fox McCloud bright down their emperor on their homeworld.

After the Lylat Wars, all surviving Venomians were either captured or fled into hiding, but nevertheless scattered throughout Lylat and became the least of the Cornerians worries, for their monitoring of Venom became postponed due to the Aparoid Invasion.

A small grouping of Venomians were led by Cornerian army officer, turned traitor Captain Shears, to revive Andross on Titania. This detachment's objectives were foiled by the combined forces of the Star Fox team and Hot Rodders gang.

Andrew Oikonny later led a short lived rebellion into conflict against the Cornerians above planet Fortuna. Assistance from the Star Fox team and uprising of the Aparoids turned another Venomian campaign into a disastrous defeat. But the Venomians were still far from extinct yet, evident from sightings of various criminals and equipments, whom were former soldiers in Andross's army.

After the Aparoid Invasion, the Anglar race emerged from the depths of Venom's toxic seas. Guided by the Anglar Emperor, they reformed Andross's cause and continued what the ape started many years ago. It is unknown what happened afterward, but it is generally agreed that they were defeated.

In one ending, Dash Bowman took up his grandfather's mantle and assumed leadership of a newly terraformed Venom. After he and Star Fox defeat the Anglars on Planet Venom, Dash decides to stay behind to try and make the planet a more hospitable place to live. Eventually, after years of terraforming, people begin to immigrate to the now-stable Venom. Under Dash's leadership, the planet of Venom flourished and soon matches in its environment, scientific expertise and affluence, forming a powerful empier. Eventually, Dash declares that Venom is now the center of their universe, threatening the peace of the Lylat system. 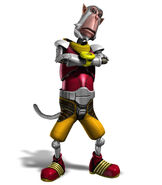 Andrew Oikonny, nephew of Andross and his successor.

Emperor of the Anglar Empire.

Dash begins to continue what his grandfather Andross began.

Ape combat mech, sighted at the Sargasso Hideout.
Add a photo to this gallery

Retrieved from "https://starfox.fandom.com/wiki/Venomian?oldid=55117"
Community content is available under CC-BY-SA unless otherwise noted.