Corneria
Venom
Training Mode
Venom Fighters are basic starfighters that were manufactured in the weapons labs on Macbeth and utilised by armies of Andross during the Lylat Wars.

Venom Fighters tended to fly in tight overwhelming clusters but they were expendable, each fighter pilot was expected to willingly give his life for the emperor and to think only one thought to destroy Star Fox.

These starfighters were first seen on the seas of Corneria just ahead of the old army base in Corneria City, advancing on the Star Fox team just as soon as Slippy Toad broke formation against Peppy Hare's urging. Venom Fighters were also utilised on Venom's plains and canyons, launched from docking bays built into the rocky landscapes, to prevent Team Star Fox from reaching their final target, the Emperor Andross. They were the first line of defence, appearing in a large cluster as soon as Fox McCloud's Arwing descended to the planet's surface. While not boasting any specific tactics or unique abilites, these particular Venom Fighters were responsible for the capture of James McCloud and Peppy Hare after their wing mate Pigma Dengar turned them in and sided with Andross, with support from Dragon Fighters.

Venom Fighters also appear in the game's training mode, appearing the All-Range Mode section. An endless tide of Venom Fighters keep appearing within the field until the player chooses to quit the training.

Venom Fighters appear in the Lylat Wars Comic under the name of Andross's Acedevil fighters. Once the Star Fox team destroyed the Bolse satellite, they set the Arwings to autopilot until their plans are halted when Andross's elite Acedevil fighters block their flight route. Executing plan 9, the Arwings perform a somersault loop to throw the fighters off their tails but they are in turn caught up with by the highly manoeuvrable fighters. Fox finds them to be too strong and not knowing what to do, while both Peppy and Slippy lose badly to the Venomian fighters and are both forced to retreat. Falco then bravely leads the tailing star fighters away from Fox in order to let him reach Andross's palace via the temple of Golemech.

Venom Fighter (I) as seen in Zero.

Venom Fighters arrive on time as soon as the level starts.

James and Peppy attacked by Dragon and Venom Fighters.

The Acedevil fighters in the manga. 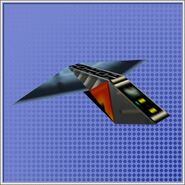