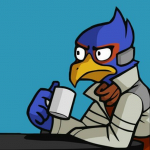 Hello. I am a huge fan of the Star Fox series. If you would like to carry on reading, then please do continue. If not, then please feel free to enjoy the rest of your day :)!

I was never a Star Fox fan a few years ago. I stuck to other Nintendo franchises such as Animal Crossing and Mario. However, I got Super Smash Bros For Wii U. I had played the fan-made Super Smash Flash in the past and just thought Fox was a terrible Tails rip-off (how I regret that moment). Anyway, I kept playing Super Smash Bros For Wii U and I used Lucario an awful lot - until I went into Smash Tour and got put into one of the fights where I was playing as Falco. I realised that he was actually quite good, and Falco slowly became my main character. I had also tried Fox not long after that, but I prefer Falco's agility and speed (Fox is much faster).

After a while, I had researched a little into the Star Fox series, but not much. I wanted to start playing the games, so I got Star Fox 64 3D. I turned off motion controls (I was already as bad as driving the AR-Wing in training mode as it was XD) and gave it a go. Absolutely loved it. The sounds, the characters, the gameplay (if I am to be picky, Slippy's voice gets really annoying). My favourite character? By far Falco Lombardi. I strangely really like blue birds with egos (Revali, I'm hinting at you) and he's made me chuckle quite a few times too. I then watched Star Fox Zero: The Battle Begins and loved every second of it. I am not too keen on Peppy Hare though - maybe it's just me. I have only recently got Star Fox Zero and play it as and when I can. Still loving it :D. I have also read some of 'Farewell Beloved Falco' and I do enjoy it, Peppy is creepy though XD.

So now you've read my Star Fox history. Good for you. It's now mid 2018 and nothing much else has happened. I constantly draw Falco, and am slowly getting better. Down below I will now state some of Star Fox stuff, just who is my favourite, who is not my favourite and some facts. Good day.

Retrieved from "https://starfox.fandom.com/wiki/User:AirCommander_Falco?oldid=50057"
Community content is available under CC-BY-SA unless otherwise noted.