Umbra-class Defense Stations were large satellites manufactured in the weapons labs on Macbeth and utilized by Andross's army during the Lylat Wars.

Built in the shape of a large wheel with two spikes as spokes, these defense platforms supported a large number of rapid-fire laser cannons used to swat opposing starfighters out of the sky. The defense stations though were weakly-armored and could be destroyed by concentrated starfighter-grade lasers.

“Umbra-class defense stations are worth four hits each, so destroy as many as you can. (if you're not worrying about points, though, you might be better off targeting the swarms of fighters instead.) Hit them with a charged laser and follow with rapid-fire lasers. Be careful, as some of them will turn and bring all of they guns to bear on you.”
—Official Nintendo Power Player's Guide, pg 101

“The Umbras can absorb a lot of laser fire before being destroyed. Wait for the "Hit+3" message to appear before you move on to the next target. Even if you're a crack shot, it will be impossible to destroy them all.”
—Official Nintendo Power Player's Guide, pg 102

“This Umbras seems to be dormant, so you don't have to worry about getting shot at. To collect both the ring and the Laser Upgrade, swoop down toward the ring and then pull a loop just as you reach it. You risk hitting the underside of the station, but the ring should help offset any damage to your ship.”
—Official Nintendo Power Player's Guide, pg 102

Thirty-one Umbra satellites are encountered by the Star Fox Team during the Battle of Area 6. Most of them are inactive, however the ones that are active are capable of pouring an immense volume of laser fire at the player, so performing barrel rolls is advisable to avoid damage.

In Star Fox Command, there is an enemy very similar to the Umbra-class defense station that was seen on Venom. The only difference is that it is smaller.

In Star Fox Zero', as well as Umbra blockades reappearing, a new ship called the Androsa resembles the Umbras. The differences are that the Androsa is much larger than before, sporting a red/yellow color scheme and features ship-funnel like weak points.

Area 6 on the Lylat Map planner.

Area 6 marked by and Umbra on the Lylat Map.

Area 6 on the in-game Lylat Map.

An Umbra-class station and some Harlocks appear in the briefing.

An Umbra within the Venom air defence zone. 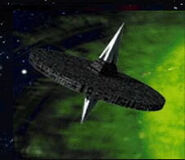 A defense station represents the Area 6 stage on the map

The Lylat Map in the 3DS release.

The in-game Lylat Map in the 3DS release.