Super Smash Bros. for Wii U

Super Smash Bros. for Nintendo 3DS and Wii U, unofficially known as Super Smash Bros. 4 (SSB4, Sm4sh, Smash 4), is a fighting video game developed by Sora Ltd. and Namco Bandai Games and published by Nintendo as the fourth and fifth title in the Super Smash Bros. series, in which characters from different franchises fight against each other.

The game was first announced at the Electronic Entertainment Expo 2011.

Like previous games in the series, Super Smash Bros. is a competitive fighting game in which up to four players from various Nintendo games fight against each other. Players use a variety of attacks to damage their opponent, increasing their damage percentage which makes them easier to knock out of the playing field.

Smash Balls, first introduced in Super Smash Bros. Brawl, make a return, allowing whoever obtains them to perform extremely powerful attacks. Trophies also were confirmed to be returning. The game is presented in high-definition visuals on Wii U and black-outlining on the Nintendo 3DS.

Both versions contain the same amount of playable characters, but feature exclusive stages. The Nintendo 3DS version includes more stages and unlockable trophies based on settings seen in Nintendo's handheld video games, while the Wii U version has more stages and trophies designed after those in home console releases.

Several assist trophies, a returned feature from Super Smash Bros. Brawl, have been revealed on Nintendo's social network, Miiverse, including Skull Kid from The Legend of Zelda: Majora's Mask and a French Bulldog from Nintendogs.

Both Fox McCloud and Falco Lombardi appeared as returning default and unlockable playable characters, wearing the same outfit appearances as their previous incarnations, except with a new realistic fur, feathers and clothing. Andross is set to return as an assist trophy, bearing the Star Fox look and likely performing exactly the same attacks as the predeceding title.

A new Star Fox stage was included, which is the Beltino Orbital Gate incident from Mission 8 in Star Fox: Assault. The stage is somewhat a reworked version of the Sector Z and Corneria stages from the first two Super Smash Bros. titles. The stage itself has the playable characters fight on top of the familiar Great Fox and Arwing designs, and the Aparoid Missile just as it rams into the Orbital Gate. Both Fichina and Solar appears in the background. The Lylat Cruise stage from Brawl returns in the Wii U game, while the Corneria stage from Melee returns in the 3DS game.

Once again, the hidden conversations made by Star Fox characters are activated by taunting successfully. This time, though, the dialog is more mission-focused, slightly based on the Orbital Gate scenario from Assault, where the team is protecting the gate until the Aparoid self-destruct program is complete.

One conversation references the playable fighters (with Fox also making a Freudian slip at one point to target the fighters instead of the missile they were on), one does not. Of interesting note, these conversations can be triggered without Fox or Falco on stage.

The voice actors from Star Fox 64 3D reprise their roles, including Mike West as Fox. One quote spoken by ROB 64 was recycled from Star Fox: Assault. Interestingly, although the stage is based on Mission 8 from Assault, major characters from the same scenario including Krystal, Star Wolf and Beltino are absent.

Because the Lylat Cruise stage returns, the previous taunt conversations return too. The dialogue remains unchanged from before, yet the background music now grinds to a halt while the characters speak. The character icons have been altered from before, likely to match the artwork used by their trophies.

The Star Fox trophy character art/poses in this game are taken mainly from their Star Fox 64 3D or Star Fox: Assault character artwork. The North American and PAL regions have different descriptions for certain trophies.

An amiibo figure of Fox was released as part of the first line up of collectible, compatible, interactive figures. This marks the first official release of Star Fox figures since the promotional Star Fox Adventures Bobblehead. Falco later received a figure as well.

“Fox is the leader of the commando unit for hire known as Star Fox. He uses both the team's mother ship, the Great Fox, and his personal Arwing fighter to challenge the evil scientist Andross. His piloting skills are top notch, but he can also bring speed and fast attacks to the battle through hand-to-hand combat.”
—Nintendo.com

“A talented pilot and part of the Star Fox™ team, Falco can be a bit rough around the edges. He once led his own galactic gang before joining up with Fox. He affects an air of cool disdain and is sometimes uncooperative, but in reality his passion for Star Fox is second to none.”
—Nintendo.com 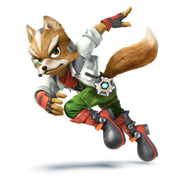 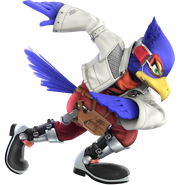 The new Star Fox stage. It is clearly based on Star Fox: Assault.
Add a photo to this gallery

Retrieved from "https://starfox.fandom.com/wiki/Super_Smash_Bros._for_Nintendo_3DS_and_Wii_U?oldid=51851"
Community content is available under CC-BY-SA unless otherwise noted.