Super Smash Bros. Melee, often known as SSBM or Melee is a 2.5D fighting game for the Nintendo GameCube. It was released in late 2001 in America and Japan, shortly after Gamecube's launch, and early 2002 in Europe.

In contrast, however, Melee greatly emphasizes movement and ringouts. Indeed, edge-guarding in Melee takes on much more significance than it does in most other games due to copious mid-air jumps and other methods of reaching the edge unfettered. Corneria and Venom appear as playable stages.

Like its predecessor, Super Smash Bros. Melee differs from traditional fighting games in that inflicting the most damage does not guarantee victory. Instead, opposing players must force their opponents beyond the boundaries of the stage. Most attacks inflict damage and can, if enough damage is dealt, knock back the enemy. Each character's health is measured by a meter that represents the damage received as a percentage. The higher the percentage value, the farther the player gets knocked back, and the easier they are to knock off the stage. Unlike other games of the same genre, in which moves are entered by button-input combinations, most moves in Super Smash Bros. Melee can be accessed via one-button presses and a joystick direction.

During battles, items related to Nintendo games or merchandise fall onto the game field. These items have purposes ranging from inflicting damage on the opponent to restoring health to the player. Additionally, most stages have a theme relating to a Nintendo franchise or a specific Nintendo game and are interactive to the player. Although the stages are rendered in three dimensions, players can only move on a two-dimensional plane. Not all stages are available immediately; some stages must be "unlocked" by achieving particular requirements.

Characters from the Star Fox series

Fox returns from the previous game as a default veteran. This time around, Falco joins the fray.

Fox is once again a default playable character. He retains his signature agility and light weight, and is still the second-fastest running character in the game. Unlike before, his blaster fires rapidly and he is equipped with new attacks which replace ones from before (like the commonplace "dropkick", which other characters used as well). While easy to knock away horizontally, Fox's fast falling speed allows him to endure attacks that send him upward. This makes it seem as though Fox is very heavy, but the reality is that the physics of the Super Smash Bros. games are different from the physics of real life. Fox is popular among key competitive players and has placed first on all versions of the tier list for Melee.

Falco makes his debut in the Super Smash Bros. series in Melee as an unlockable character. He is a "clone" of Fox (adopting some of Fox's attributes from the previous game, like his Blaster, Up Special Move, and "loner" behavior), meaning all of his moves are exactly the same, given some of them have different effects. For example, Falco's up smash is weaker than Fox's, but he has a stronger forward smash, and both of their down smashes do equal damage. Falco is slower, but jumps higher than Fox, and is only a little heavier (still lightweight). Additionally, Falco's physical (standard) moves have longer reach than Fox's, but his special attacks don't travel as far (with the exception of his blaster's shots, which travel farther than Fox's blaster's). Like Fox, Falco falls fast and is hard to KO vertically, but his light weight allows him to be KO'd easily horizontally. Being similar in nearly every attribute to Fox, Falco is also a key character used professionally by players, and places very high on the tier list in each of its versions.

Wolf makes an obvious, brief cameo appearance in Melee's introduction movie, where he and Fox are dogfighting each other. Slippy and Peppy appear at the Venom and Corneria stages whenever Fox or Falco perform their Easter Egg taunt. If Falco is not on the stage, he will make commentary alongside Slippy and Peppy, and if Fox is not present, he will talk with them. If both Fox and Falco are on the stage, then only Peppy and Slippy will converse.

Stages from the Star Fox series

While Sector Z is no longer a playable stage as it was in the first game. It is succeeded by Corneria, which plays identical to the Sector Z stage, though Great Fox is much smaller and flies through Corneria City and the grassy plains and seas, akin to the closing credits of Star Fox 64. Arwings and Wolfen will occasionally appear and act as temporary platforms and hazards like the previous game. Corneria's background music is a combination of Venom's decent, Space Armada and the main theme from Star Fox.

Corneria is also the setting for Event 32: Target Acquired, where the player plays as Falco and has 1 minute to KO Jigglypuff on the Corneria stage as many times as possible. The player has to KO Jigglypuff more than the Arwings do to succeed. Jigglypuff begins every stock with 70%. The challenge of the event is that the Arwing's are very aggressive and will boast a higher chance of K-Oing before the player does.

Venom is also a playable stage, but instead of fighting on the ship while it faces left, the characters fight on the ship as it faces the screen. Venom is based on its planetary appearance in Star Fox 64, with its canyons and rugged mahogany landscape, with patches of volcanic activity. The gigantic atmosphere of the stage is a compliment to Venom being the largest world in the Lylat System. Occasionally, Great Fox will pass hangar bays where Venomian fighters will fly out of, and Stone Colours and Blocker barricades make small appearances. Venom's background music is the leitmotif of the Star Fox team starting from Star Fox 64, rather than any background tune Venom had in the games.

It is also the setting for; Event 23: Slippy's Invention. In this scenario any character can play on the Venom stage against a co-op of both Fox and Falco, both of whom are permanently invisible throughout the match and as a result, they are more difficult to see. Although they are invisible, Fox and Falco can still be damaged, like in Invisible Melee. The stock icons for Fox and Falco appear darkened to indicate their invisibility.The event will not end until the player can K'O them both.

At the beginning of the match, Slippy says, "How's the cloaking device I invented?" The communication with Slippy begins shortly after the announcer says "Go!"

Trophies from the Star Fox series

Trophies are a new feature in Melee. They are considered a replacement to the character profiles from the previous game. Trophies can be earned randomly in Adventure Mode, by using coins in the Lottery Machine, completing special events, or completing Classic, Adventure, or All-Star mode with certain characters.

References to the Star Fox series

Falco
Add a photo to this gallery 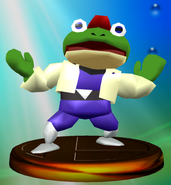 Slippy's trophy
Add a photo to this gallery

Retrieved from "https://starfox.fandom.com/wiki/Super_Smash_Bros._Melee?oldid=51841"
Community content is available under CC-BY-SA unless otherwise noted.