The Star Fox 64 3D Platinum Soundtrack is a soundtrack CD for Star Fox 64 3D composed by Hajime Wakai and Koji Kondo . It was distributed on December 26th, 2011 exclusively to Platinum members of the Japanese Club Nintendo service. The tracks are non-orchestrated, taken directly from the game itself. It boasts a hefty 42 background musical tracks with a total disc length of 65:01. The tracks are played in roughly identical order to the original N64 game's music menu. 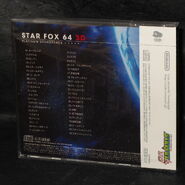 The rear cover.
Community content is available under CC-BY-SA unless otherwise noted.
Advertisement