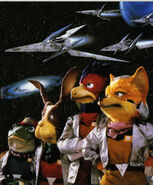 James and Peppy ambushed on Venom after Pigma commits treason.

Star Fox prepare to ship out to enter the fray on Corneria City.

Star Fox team in Command's backstory. Note that this picture shown looks like one of the original Star Fox pictures, shown above.

Slippy Toad telling his grandchildren about the legacy of Star Fox.

Fox's motto in the Star Fox 64 manga.
Add a photo to this gallery
Retrieved from "https://starfox.fandom.com/wiki/Star_Fox_(team)/Gallery?oldid=48993"
Community content is available under CC-BY-SA unless otherwise noted.