Star Fox is a series of sci-fi themed rail shooter video games created by Nintendo, featuring anthropomorphic animals as characters. The setting mainly takes place in outer space of the Lylat System. Games in the series have been released on Super Nintendo Entertainment System, Nintendo 64, GameCube, and Nintendo DS. Most of the games are considered rail shooters, although Star Fox Adventures is more of an adventure title in the vein of The Legend of Zelda.

Facing the wrath of the evil Emperor Andross, Fox McCloud and his team must battle their way through the various planets of the Lylat System to put an end to Andross' madness.

The game was canceled due to the impending release of the Nintendo 64, and the desire to use a more powerful system. Nintendo has stated that it currently has no plans to officially distribute this title. Some pre-release copies have since been leaked, and an anonymous ex-Nintendo employee finally released the near-final Japanese ROM in August 2002, making it fully playable with an emulator. Some of the gameplay elements introduced in this sequel were later implemented in Star Fox 64 and Star Fox Command.

Many years have passed since the supposed death of James McCloud, the former leader of the Star Fox Team. Andross, a psychotic scientist and powerful dictator of the planet Venom, has built an army and unleashed an invasion onto the neighboring planets of the Lylat system. Under direct orders from General Pepper, a new Star Fox Team, lead by James' son Fox, must battle their way through Andross' forces in hope to stop him and liberate the Lylat system. 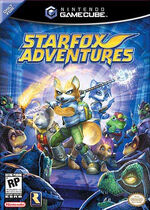 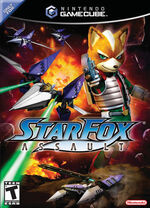 Andross may have been defeated, but a new threat is rising from the poisonous Venom Sea -- The Anglars, lead by the Anglar Emperor. And that's not all; Team Star Foxhasbeen shattered, and Fox stands alone against the Anglars.

It is implied that Command is non-canon to 64, Adventures, and Assault, as it has many different endings. It remains to be seen in any future titles if this game is indeed relevant to the series continuity.

At E3 2010 a promo trailer for the new Nintendo 3DS was shown. The trailer depicts an Arwing flying out of a DS along with other iconic Nintendo-related objects -- including DK barrels, the Master Sword, and a Hylian Shield. Nintendo confirmed that they were producing a remake of Star Fox 64 for the 3DS. Some screens of the game are available.
Retrieved from "https://starfox.fandom.com/wiki/Star_Fox_(series)?oldid=29536"
Community content is available under CC-BY-SA unless otherwise noted.