Star Fox is the name of a 132-page series of comic pages that ran in Nintendo Power in eleven 12-page installments from February 1993 until December 1993. It is an adaptation of Star Fox for Super Nintendo, with an early expanded plot that is noticeably different from subsequent installments. Illustrated by Benimaru Itoh, these comics started in issue 45 and ended in issue 55. 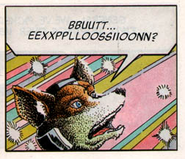 Fara Phoenix as shown at the beginning of Act 3

Mr. Phoenix, from near the beginning of Act 2

Vixy, seen only in a photo.

General Pepper's lieutenant appears here at the end of Act 2.

Appears near the end of Act 4.

Their ship is about to be attacked.

Slippy shows Falco a photo of his girlfriend, Croakella. 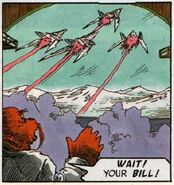 The minstrel sings a short ballad about the Star Fox team.

Andross remembers his foster android pig parents.
Add a photo to this gallery

Retrieved from "https://starfox.fandom.com/wiki/Star_Fox_(Nintendo_Power_comic)/Gallery?oldid=49513"
Community content is available under CC-BY-SA unless otherwise noted.