The Four SpellStones are pendants that each bear burning fires or shimmering water like centers.

“Four Stones forged of Dark Matter which absorb energy from within the planet and hold it together. General Scales has removed all four SpellStones, causing the planet to tear apart. They must be returned to the Force Point Temples.”
—Instruction Booklet

The ancient Krazoa originally created the four SpellStones to act as barricades upon the seal, keeping the planet's dark energy from continuously tearing Dinosaur Planet apart.

During the SharpClaw conquest of Dinosaur Planet, General Scales and his SharpClaw army invaded the Force Point Temples and took the SpellStones from the seal. The SpellStones originating areas were in the four satellites they rested on, as implied by General Scale's ultimatum towards Garunda Te, where he demands that he return the SpellStone to its sacred land.

Although Fox was successful in returning the SpellStones, he learned that the planet required the six Krazoa Spirits to ensure the planetary reconstruction. Even though the spirits were returned to Krazoa Palace, Andross absorbed the spirits thus speeding the planet's ruin. After Andross was defeated in outer space, the spirits were able to resume their protection of Dinosaur Planet and returned DarkIce Mines, CloudRunner Fortress, Walled City and Dragon Rock back to the planet's main surface. 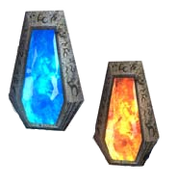 SpellStones of Fire and Water

General Pepper explains that Sauria is breaking apart and has hired the Star Fox Team to investigate.

The chamber where the four SpellStones rest, keeping Sauria in one piece.

The Fire SpellStone on the King RedEye's forehead.
Add a photo to this gallery

Retrieved from "https://starfox.fandom.com/wiki/SpellStone?oldid=52281"
Community content is available under CC-BY-SA unless otherwise noted.