“Corneria's main battle fleet has suffered severe losses in Sector Y! A huge space battle has left our flagship crippled- or perhaps worse. Debriefed survivors have informed us about a new attack squadron of gigantic humanoid battle suits in the area. Although it may be too late to rescue our fleet from disaster, we need you to get in there and take out Andross's new iron soldiers! Their shields will deflect anything but a direct hit, so aim carefully! They are of course, accompanied by star fighters that will keep you on your toes.”
—General Pepper's Flight Log, pg 60

The Shogun Warriors are two fast-moving mecha, manufactured in the weapons lab on Macbeth, used by Andross's Empire during the Lylat Wars in the battle at Sector Y.

The Shogun Warriors are ape-shaped combat space suits, each armed with a blaster laser pistol. Their method of space travel is a built-in jet pack, able to create great bursts of speed, able to dodge the Arwing's combat computer.

When Andross's Empire attacked the Cornerian Fleet massed at Sector Y and casualties were met on massive highs, Cornerian survivors informed command of attacks from giant humanoid battle suits. The Shogun Warriors were examples of the new infantry soldiers, meeting the Star Fox team in an All-Range field just ahead of the Saruzin flagship. With the twin warriors destroyed and their destructions added to the Star Fox team's invoice, their defeats prompted the Shogun warlord to engage the Cornerian backup. 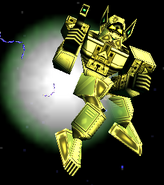 The Shogun warriors are together at the start, but then they split up.