Sensor Bombs are proximity mine-type explosives that are available in "Star Fox: Assault".

To plant one on the ground use the R or A button. Once planted, the mine will spin and hover above the ground, its red light will glow, and it will release motion sensitive waves. Anyone within the radius of the waves will be bombed. The bomb "leaps" up an instant before it explodes.

“Sensor Bomb: Place these bombs with the fire button then wait for something to pass close by and set them off.”
—Star Fox: Assault; Instruction BookletThe Sensor Bomb is mostly useful in a multiplayer match. It should be placed behind corners to surprise enemy players. Its major disadvantage is that it also reacts to the player who placed the bomb, so it's important to remember where it was placed. The bomb emits a red, circular light after being placed, so it can be spotted.

Another drawback is that the Sensor Bomb is an indirect weapon that needs to be placed first. It is not recommended to run through a map while carrying it, as you can be surprised by an enemy without being able to defend.

So when placing a Sensor Bomb, enemy players should not be nearby. Characters with a tail, like Fox McCloud, are especially vulnerable when placing it, as they bend forward during placement, raising their tail which lets them be exposed to enemy fire while almost maintaining their hitbox size compared to standing (see gallery below).

There is barely any tactical use for it during singleplayer on-foot missions because enemies rarely follow a defined path, hence can hardly be triggering an explosion. 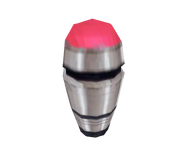 Retrieved from "https://starfox.fandom.com/wiki/Sensor_Bomb?oldid=55983"
Community content is available under CC-BY-SA unless otherwise noted.