The Satellite Defense Platform is a space station in the Lylat System. Constructed by the Cornerian Army, it is a stationary defense platform and appears to be entirely automated. It is armed with a powerful laser cannon capable of taking out an entire formation of missiles or fighters in a single shot. However, it takes a considerable amount of time to recharge and can only attack a target within the cannon's line of fire. As time passes, the Satellite will slowly rotate counter-clockwise, sweeping the entire system for targets. 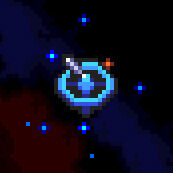 The Satellite Defense Platform with its laser cannon charged 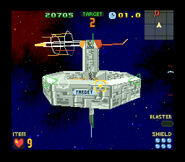 The Satellite Defense Platform, taken over by Brain Spoilers
Community content is available under CC-BY-SA unless otherwise noted.
Advertisement