ROB's name is a reference to the NES accessory R.O.B.(Robotic Operating Buddy), to which he bears a more than passing resemblance. The "64" is derived from the console of his first appearance, the Nintendo 64.

ROB's Japanese name, "NUS", stands for "Nintendo Ultra Sixty-four," the original name of the Nintendo 64 system, and is part of the serial number of all N64 components: the controller, for example, is NUS-005. Like with his English name, the 64 is derived from the console of his first appearance.

ROB has the ability to completely control the Great Fox, technically making the ship fully autonomous. He is also networked to the ship's main computers, allowing ROB to process any information requested by the Star Fox Team. ROB can also use the ship's transfer device to send vehicles and items to Star Fox team members in the field.

ROB 64 was not completed when James died. He first served the second Star Fox team.

When Fox became leader of Star Fox, ROB was hardwired to the Great Fox. He was the team's Star Fox Great Fox pilot. He helped in many missions, and would only provide backup fire for the team if the Arwings could not penetrate a target. He became friends with the members early on.

ROB made an important role in the Lylat Wars.

He was the one who intercepted the destress signal from General Pepper, and transmitted it. There wasn't much he did in the battle of Corneria except provide backup fire. At Meteo, he used the Great Fox's main guns and blasted the team's way through the astroids. He also gave Fox a Smart Bomb to help. At Katina, he didn't do much except give Fox supplies. In Sector Y, he provided more backup and gave Fox some supplies. In Fichina (called Fortuna in Lylat Wars due to a mistranslation), he reported that there was a bomb in the base, and gave more supplies to Fox. At the Aquas, he dropped Fox off in the waves and gave supplies. In Solar, he backed the team up and gave Fox many supplies, because of the searing heat. Then, in Sector X, he took out some of the rubble so he could pass in and drop off supplies. He then had to receive data to find Slippy which he reported was on Titania (if you fail to beat Spyborg). This time, he went ahead of the team to find Slippy and soon found him. At Zoness, he again provided covering fire and needed Fox to destroy the beacons because the ship was too big to pass unspotted. At Macbeth, he helped out in finding the Forever train's destination. In Sector Z, while passing through the debris feild, the Great Fox was attacked by missiles which were shot down by Fox and his team. At Bolse, he could not do much because of the size of the station and was only able to give Fox supplies. Near the end of the road, at Area 6, he helped destroy many of the battle cruisers with his heavy laser cannons. He flew low at Venom to back up the team and drop off bombs. He was unable to help against the fight against Golemech (first boss of Venom 1) because the ship would not fit in the temple. He was also only able to watch helplessly as Fox plunged to fight Andross. After Fox destroyed Andross, ROB escorted the team to Corneria, and then flew off into the sunset. Finally, in the alternative ending, Venom 2, ROB would drop life-saving items during the fight with Star Wolf.

ROB helped in tracking down the remaining Venomian forces for 4 years after the wars. Yet there wasn't much else he did during that time period.

ROB intercepted the Hot Rodders' SOS signal on Titania. He flew in orbit, while the team went down. Later, ROB was ordered by Peppy to deploy the Landmaster (with Slippy as the pilot) onto Titania so he could scout ahead and discover whether Captain Shears had any ulterior motives after an incident where Fox and Falco got into a dogfight and Falco ended up badly damaged and crashlanded. When hailed by the Hot Rodders, ROB was then ordered by Peppy to investigate the files that the Hot Rodders stole from the research base: He then revealed that the files did not contain anything regarding Andross's research, but rather a cloning program to resurrect Andross himself. ROB then informs the team regretfully that Slippy's communication link was cut at some point prior when Peppy realized that he inadvertently placed Slippy in grave danger. He spent the remainder of the mission observing Fox's infiltration of the facility to rescue Slippy.

8 years after the Lylat wars, ROB and the Great Fox fell in disrepair. He suffered from joint dislocation, and had to be fixed many times by Slippy. ROB also supplied them with the information regarding the conflict on Sauria, although he ended up short circuiting, resulting in ROB needing repairs from Slippy that were completed as they arrived at Sauria's orbit. When the team got their mission on Sauria, ROB was unable to use the Great Fox as help, as its weapon systems didn't work right, but he did transport fuel cells, and some Binoculars to Fox down planet, but due to the ship's disfunctional transporting systems, had them accidentally scattered all over the Planet. He transmitted data from Fox throughout the mission. At the end, ROB couldnt help in the battle against Andross. He was happy to get their fee because he "really needed some oil". He accepted Krystal in the team and could sense Fox's blood pressure rise, and said it aloud jokingly.

ROB fought hard in the invasion. He transmitted data from the core memory captured on Fortuna, and participated in the battle of Katina, and the attack on Sargasso space region, as well as the battles of, Fichina, Meteo, Sauria and Corneria. He then helped Beltino transmit data from the core memory captured on Meteo. At the Battle of Beltino orbital gate, he warned the team many times to take down the missles heading towards the gate. At the battle of the Aparoid Homeworld, he and Peppy fought bravely, but suffered damage from the Aparoids. They soon got many Aparoids on the ship. When the shield came up, he destroyed the Aparoids outward base, and he and Peppy sacrificed themselves by ramming the Great Fox into the sheild, where they were presumed to be killed. But they survived with the Ships cockpit escape pod.

The team got a new Great Fox, but it was much weaker. It is unknown about ROB's opinion on it. ROB underwent changes to get hardwired to the new Great Fox, earning him the sarcasm chip. He was the only one not to leave the team, besides Fox. When the Anglars invaded, ROB analyzed data from their ships and explained them to Fox. He then asked if Fox wanted training. If you choose 'Yes', he makes you undergo 4 training excercises; 1 is steering, 2 is fighting, 3 barrel rolling, 4 is time limit. If you choose 'No', then ROB takes you to Corneria. There he tells Fox about the fuel limit, in which Fox replies that if he gets taken down then it's up to ROB, who replies with a laugh asking if that was a joke. At the fight, ROB backs up Fox. After that, ROB then tells Fox that the Anglars ships are made of chrome that can survive the Venom sea. You're then left with 3 choices. Either one you choose leads you to different paths.

ROB's debut in the Star Fox series was in Star Fox 64. His role in the game was operating and maintaining the Great Fox. When needed, ROB sent supply boxes that contained rings, smart bombs, lasers, or Wing gyro from the mothership. ROB also repaired the shield-depleted Arwings of Fox's teammates, and would be done with fixing them by the time Fox had finished the next level. ROB only serves to relay information to the pilots, such as "Location confirmed. Sending supplies." or "Great Fox will cover you." In this game, ROB is the most analytical and does not appear beyond the transmission channel.

ROB appeared again in Star Fox Adventures. He helped with processing saved data. His role was very minor in this game, but he appeared in the ending scene along with the other members of the Star Fox team. Also in this game, ROB seems to have human-like, changing personalities. This may be due to his rebuilding by Slippy Toad. This is the first time he appeared in full physical form as he was restricted to the transmission channel during the Lylat Wars.

ROB served a role in Assault similar to the one he had in Star Fox 64. He was nearly destroyed when Peppy Hare crashed the Great Fox into the shield protecting the entrance to the Aparoid Queen's lair, but Peppy and ROB managed to use an escape pod before the ship was destroyed. The Apraroid Queen had used ROB's voice to try and convince the team to "join them".

ROB returns in Star Fox Command, piloting the new version of the Great Fox in the map mode, and also giving some advice to Fox and the other characters during the missions. On some paths in the game, ROB joins Star Wolf Team when no "hero" character is around to play as. In this game, he, like in Adventures, becomes more humanoid, even uttering sarcastic remarks. For instance, if the Great Fox is destroyed, ROB says, "Goodbye cruel world." He even has veiled feelings for Lucy Hare, when he remarks to her that he'd do anything for her. 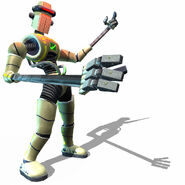 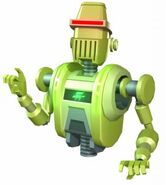 "A bipedal robot and operator of Star Fox's mother ship, the Great Fox. In Star Fox: Assault, he is in charge of observation and analysis duties and assists the Star Fox team commander, Peppy. ROB 64 is also responsible for the vital job of sending vehicles and items to Star Fox team members in the field."

Retrieved from "https://starfox.fandom.com/wiki/ROB_64?oldid=30501"
Community content is available under CC-BY-SA unless otherwise noted.