“Hey sure-shot! Get out your blaster and take care of our admirers will ya?”
—Falco Lombardi

The Plasma Cannon is a special weapon with unlimited ammunition and powerful blast fire used in Star Fox: Assault. It is among the best weapons in the game, but it can only be used by Fox as he rides the wing of an Arwing or Wolfen. In both appearance and functionality, it greatly resembles the blaster weapon also used by Pilots in the Versus Mode of Star Fox 64.

The Plasma Cannon is a large, bazooka like blaster which fires lavender coloured shots. It is fired and held over Fox's shoulder, resembling and controlled in the same manner as the Homing Launcher. Unlike the regular blaster, it cannot fire Charge Shots but can constantly shoot rapid firepower trails by holding down the button.

“Plasma Cannon: A cannon you can wield wile riding on the wing of someone's ship. It fires rapidly and has endless ammo.”
—Star Fox: Assault; Instruction Booklet

“What?! Is it bird season all of a sudden?”
—Falco Lombardi (If Fox shoots the Arwing) Fox had to use it while aboard Falco's Arwing and take a certain number of Aparoid units. He also occasionally had to use it to help his teammates.

“What are you doing to my darling Wolfen?!”
—Wolf O'Donnell (If Fox shoots the Wolfen) Fox had to use it to reluctantly defeat General Pepper after his flagship was infected by Aparoids. He was aboard Wolf's Wolfen and, once again, had to use it assist his teammates. 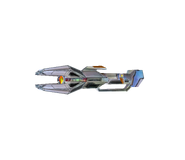 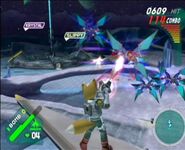