Out of This Dimension

Out of This Dimension is a strange location found outside of the known space of the Lylat system, or existence as we know it. Escape from the surreal level is impossible, and it is seen as the alternate ending for the game.

This level is extremely dangerous and has a very high chance of the Arwing to explode as the enemies at the end of the level are nonstop, and they are annoying as they flip the letters of THE END if you don't defeat them. This level also probably has a high chance of motion sickness or epilepsy because of how the background is always lurching until you beat the Slot Machine.

The zone is comprised of black space filled with various colored, sized, smiling moons and cartoony stars. The background lurches and is distorted throughout the level, but this stops when the player defeats the Slot Machine. The only enemy found in this level is also exclusive to this level: the paper plane which is a small threat by itself, but can often swarm the player in large numbers. There are also pillars that come towards the player. The end boss of this level is the mysterious Slot Machine, which interestingly acts as if it has an artificial intelligence computer.

This level, unlike others, does not end after beating the boss, but instead plays on infinitely with the credits scrolling by. The player can then shoot at each of the letters of "THE END" and turn them over. When the player aligns the letters properly, however, the letters re-situate themselves. Enemies from the regular levels attack the player and the letters, causing the letters to scrambled around over and over. Death for the player is highly likely, as regular enemies continue to appear indefinitely and only very rarely drop supply rings.

The fate of the rest of the Star Fox team and Corneria is never directly revealed, although it is suggested by General Pepper's briefing ("Come in Arwings!! Fox, where are you?!! We need you to protect Corneria!!") that Andross would take advantage of Fox's disappearance to conquer the Lylat System. Thus, accessing this level is considered an automatic nonstandard game over.

Out of This Dimension appears in Star Fox as an easter egg in the game. The realm could be accessed by following a series of abnormal manoeuvres.

The Arwing is located in the bottom right of the map of the Lylat System if you look closely. This is the location of Out Of This Dimension. 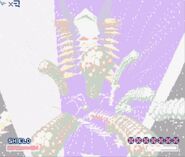 The Arwing cockpit's point of view as it enters Out Of This Dimension. 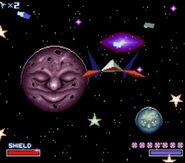 Out Of This Dimension upon beating the Slot Machine. 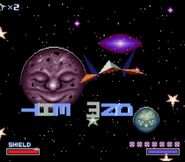 The THE END minigame.

General Pepper tries to contact Fox after he enters the zone. 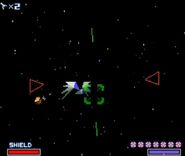 The blue pheonix as seen in first person view.
Add a photo to this gallery

Retrieved from "https://starfox.fandom.com/wiki/Out_of_This_Dimension?oldid=47943"
Community content is available under CC-BY-SA unless otherwise noted.