Mole Missiles are a type of concussion explosive, assembled in the weapons labs on Macbeth and utilized by the Venom forces assembled on Corneria.

Mole missiles are drill shaped rockets that are primarily green. They are buried under the ground and activate when ships are detected flying overhead.

“Beyond the waterfall in Route 1, and in early stretch of Route 2, these green missiles shoot up from the ground and explode. They leave Silver Rings behind if you shoot them before they blow, so keep an eye out for these bombers below.”
—Official Nintendo Power Player's Guide, pg 27

Mole Missiles were only sighted at Corneria beyond the seas and waterfall area beyond Corneria City.

A similar enemy appears in Star Fox Command, under the deployment of the Anglar army. Considering that the Anglars have a history with Andross, it is not unreasonable to speculate that these are either new variants or identical missiles. 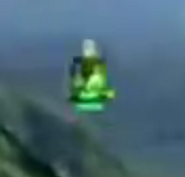 A Mole Missile in Star Fox 64 3D.
Add a photo to this gallery

Retrieved from "https://starfox.fandom.com/wiki/Mole_Missiles?oldid=52105"
Community content is available under CC-BY-SA unless otherwise noted.