“I've got a present for ya!”
—Attack Carrier Captain

This article is about an enemy weapon. For the item Great Fox is able to use in Star Fox Command, check Missile (item)

A Missile is a common weapon which explodes upon impact and can cause anything from minor damage to completely obliterating its target. In Star Fox 64 and the 3DS rerelease, Missiles are weapons manufactured in the weapons labs on Macbeth and used by the Attack Carrier, Granga and Gorgon as projectiles. Missiles also appear at Area 6, fired from behind the heavy capital warships in the three defensive fleets.

Granga, the Attack Carrier, the Meteo-Crusher and the Gorgon were armed with missile launchers. Venom's Air Defence Zone used missiles in all three of their lines. A squadron of heat seeking missiles also gave chase to Peppy Hare just after the wave of Ninjin Missiles.

“Peppy is being chased down by an entire pack of heat-seeking missiles. If you don't want to lose him, forget the Umbras and fighters and go after the missiles. If you miss, he may have to sit out the rest of the battle.”
—Official Nintendo Power Player's Guide, pg 103

“The arms fire off homing missiles, so destroying them can keep you safe.”
—Official Nintendo Power Player's Guide, pg 33

“The missiles shoot out of the launch bays four at a time. Lock on and blast them, but concentrate most of your fire at the bays themselves.”
—Official Nintendo Power Player's Guide, pg 33

“Destroy the tentacles to make Gorgon open its armoured shell and then destroy the energy balls. Blast the missiles and fighters for Supply Rings.”
—Official Nintendo Power Player's Guide, pg 105

Missiles fired by the bosses are not worth any Hit points, but most may leave a Supply ring behind after shooting them down. Missiles that are fired by Granga and the Attack Carrier will home in on the three teammates and cause damage if one of them report it in. Performing a somersault loop can help avoid the missiles used by Gorgon, especially in the Expert Mode where just one hit will destroy the Arwing's wings and lose its laser upgrades. The Area 6 missiles are worth Hit points however, fired from behind the Harlock-class Frigates and the Zeram-class Cruisers. Firing charged bolts towards a missile or at a nearby battleship can set a chain reaction, destroying any line of missiles, which is a good way to rack up bonus points.

In the Lylat Wars Comic, the Star Fox Team eventually reach Granga, discovering that he is fully armed with missiles and grenades. 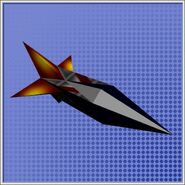 In game model of the Star Fox 64 enemy missiles.

Granga's missiles on a promotional artwork.

Missiles fired from behind the first twin Harlocks. Great Fox's guns will miss these missiles even if the C>>> icon is responded.

Missiles fired from behind a Harlock in the second line.

Missiles fried from behind twin Zerams in the last line.

Fox warns that Granga's arsenal consists of missiles and grenades.