“General Pepper's Flight Log, pg 34
Our probes have picked up enemy activity in the Meteo planetoid system. It looks like Andross has built a planetoid crusher to clear a way through the belt for his invasion fleet. We need to have the Star Fox team check it out. Keep your eyes peeled as you move through the planetoids. Their movement is usually predictable, but if any of theses rocks collide, it could send them careening off in wild directions. We've also scanned some unusual warp energy readings in the sector. If you find the source of to explore it to find out if it is part of Andross's attack.”
—

The Meteo Crusher is a utility ship manufactured in the weapons labs on Macbeth, designed to crush asteroids and celestial bodies in the Asteroid Field into cosmic dust (hence its name), and clear a pathway for Andross's space fleets. In the original 1993 game, it is known as the Rock Crusher, acting as bosses of the Missions at the two Asteroid Fields and Sector X, also reappearing as the Meteo Crusher in "Star Fox 64" as the boss of the Mission at Meteo with abilities also taken from the original game's Blade Barrier boss. The Meteo Crusher also makes an appearance in the "Lylat Wars Comic", serving a role that mirrors the role it had in the N64 game.

Despite being a utility vessel, the Meteo Crusher is not defenseless, having a cluster of four cannons on either end of its structures. Once the cannons are destroyed, however, there is nothing keeping its heavy body secured to the main core inside and it flies off into space exposing itself. The core is where the minerals are thought to be stored and is the weakest part of the Meteo Crusher. Its only defense is a single rapid fire cannon at its center.

“I cannot allow you to go any further.”
—

The Meteo Crusher's pilot was one of the most powerful and intelligent of followers who had been promoted to positions of leadership in Andross's military machine, and was given command of the specialized war machines of great power. Andross has dispatched this key lieutenants to seize a strategic location throughout the Lylat system by clearing the asteroid field away for his empire and was accompanied by fleets of support craft. When Cornerian probes picked up enemy activity in the Meteo planetoid system, the detected that Andross built a planetoid crusher to clear a way through the belt for his invasion fleet. If this natural defensive barrier was penetrated, Corneria would be open to attack by Andross's battleships.

After the Star Fox team flew through the asteroid belt, the Meteo Crusher came upon them and blocked their flight path to prevent them reaching Fichina, the primate pilot declaring that they would not go any further. After Fox destroyed the Meteo Crusher's deflector shield and the energy stream projector's generator, the pilot pretended to be overcome by Fox's skills and acted out a surrender. However, Falco rhetorically uncovered the pilot's trickery, as the ship somersaulted itself to reveal a secondary phase. The pilot then stalled for time to let the ring lasers charge, revealing that he had no intention of surrendering, telling the Arwing crew they were not as stupid as they looked before resuming his attacks. The Crusher made one last ditch attack with ring lasers and missile launchers, but the ship's remaining energy supply cores were unprotected and Fox was able to target them easily and the Crusher was finally defeated. Furious, the pilot yelled in disbelief about the fact that he had lost to a small squadron of mercenaries, while Fox retorted that they were in a hurry and apologized for leaving so quickly, before the ship exploded.

The Meteo Crusher and its Pilot appear in the Lylat Wars Comic, filling the same role as the games. The pilot is confidently and quickly defeated by Star Fox like in the games. Over confident by his victory over the Meteo Crusher, Fox fails to notice UFO readings like Peppy Hare does, before being ambushed by Andrew Oikonny and the Star Wolf Team.

The pilot whines that he can't believe he lost. 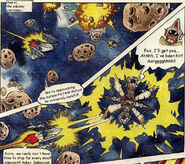 The Meteo Crusher, as it appears in the Lylat Wars Comic.