Macbeth appears in Star Fox on the third level route. It was depicted to be a highly seismically active planet with a very dense atmosphere and many volcanoes dotting the planet. Andross sees Macbeth as an ideal place to build a forward base. The Spinning Core is the stage's boss. 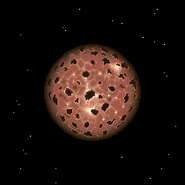 Retrieved from "https://starfox.fandom.com/wiki/Macbeth?oldid=36427"
Community content is available under CC-BY-SA unless otherwise noted.