The Light Arwing[1] is a smaller, faster version of the Arwing used by Miyu and Fay in Star Fox 2. This craft lacked defense, but made up for it in speed. Its default special item is the barrier.

In contrast to the regular Prototype Arwing, the Light Arwing is much thinner, consisting of a split front end and wings that angled towards the back of the ship instead of outwards as with the Prototype Arwing. The Light Arwing is likely the most combat-ready ship in the game, as it can fire charge shots off at a higher rate than the other Arwings in the game. However, it has the weakest shield resistance of the three Arwings presented in this game, at 12 hit points, compared to 16 for the Prototype Arwing and 20 for the Defense-Class Arwing. The small margin of resistance between the Light and Prototype Arwings could make a large difference when fighting tough enemies. 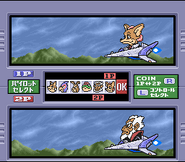 Fay and Miyu with their Arwings (final version).
Add a photo to this gallery

Retrieved from "https://starfox.fandom.com/wiki/Light_Arwing?oldid=48663"
Community content is available under CC-BY-SA unless otherwise noted.