The Krazoa are ancient beings that ruled the Dinosaur Planet long before the SpellStone crisis in Star Fox Adventures. And it is said that they were the initial builders of the Krazoa Shrines found across the planet; Peppy Hare's studies of the Dinosaur Planet also revealed that they were the creators of the SpellStones, which held the planet together.

At the time of the SpellStone crisis, the dinosaur tribes knew of the Krazoa as those who gave stability to the planet.

They exist as the six Krazoa Spirits able to pass through walls, and can inhabit someone's body temporarily. The Krazoa could also apparently control dark matter. Andross manipulated General Scales' rise to power and tricked Krystal and later Fox McCloud into gathering the spirits of the Krazoa, using their mystical properties to fully revive himself in a new body.

News of the Krazoa's great powers seemed to have reached the ears of other Lylat planets, as a near death Andross had arrived on the planet, hoping to take advantage of their powers to restore his physical form after his defeat during the Lylat Wars and brief revival four years later. In the midst of his arrival, General Scales was leading his SharpClaw Army to conquer the planet, including the collection of the Krazoa Spirits. The King EarthWalker sent out an army to defend the Krazoa Palace against the SharpClaws and kept the Spirits safe inside the Krazoa Shrines, but getting slaughtered in the process led to the few surviving EarthWalkers sending out a Distress Signal. When it was picked up by a courageous young fox girl named Krystal, she came to the planet's rescue and attempted to release the first spirit. Once released, Andross trapped Krystal in a crystal prison and waited patiently for Fox McCloud to release the other five spirits and bring them to the palace, as Krystal had. As Fox returned the first SpellStone, he was contacted by what appeared to be a projection of a Krazoa, who claimed Krystal released it when she accepted it's test. It asked him to finish what Krystal started to save her life.

Fox was eventually successful in bringing the other five spirits to Krazoa Palace, unknowingly helping trigger Andross' resurrection, as the spirits flew themselves into Krystal's prison. She channeled their power, releasing them into an enormous statue opposite the site of her prison. Eventually the head of the colossus came to life, claiming itself to be the mighty Krazoa God before immediately taking to space. As Fox flew in his worn-out Arwing to face the imposing, suspicious threat, the statue's head turned around to reveal the same mad scientist he destroyed eight years ago, reborn and eager to destroy the Lylat System. Without a second thought, Fox flew to battle his archenemy once again. With surprise help from Falco Lombardi, Andross was defeated and the six Krazoa Spirits abandoned their Ape host, redeeming themselves as they returned to reassemble the shattered sacred lands to the surface of Dinosaur Planet.

The Krazoa that talks to Fox and Tricky about the spirits. 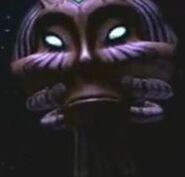 The statue that became the Mighty Krazoa God.

The Krazoa abandon Andross as he is about to explode.
Add a photo to this gallery

Retrieved from "https://starfox.fandom.com/wiki/Krazoa?oldid=49565"
Community content is available under CC-BY-SA unless otherwise noted.