“To enter the lair of the RedEye King, you must first find the two sacred teeth. Not an easy task, as they are protected by the very life force of the RedEye Tribe.”
—King EarthWalker

The King RedEye was the namesake ruler of the vicious RedEye Tribe, and was a massive Dinosaur, even for his kind, who held the final fire SpellStone atop his head in Walled City, in Star Fox Adventures.

The RedEye King, due to his unnatural size, became the tribe's leader and they became enemies of the EarthWalker Tribe. The two rival tribes waged war on each other for some time, but the RedEye Tribe were defeated and imprisoned into the Walled City, locked away with the Sacred RedEye Teeth, kept secured by the EarthWalkers. The King was kept in the largest dungeon.

During the Plight of Sauria, when General Scales and the SharpClaw captured the Walled City, they intended to gain support from the RedEyes in their conquest, by setting the King and his tribe free. They got their revenge on the EarthWalkers by slaughtering most of them, and trapping the King EarthWalker. He then had the city occupied and his tribe stationed there. He kept the final fire SpellStone in this dent in his skull and guarded it in his former prison. When Fox McCloud and Prince Tricky came to get the SpellStone, the deranged King opened the gate and attacked, but Fox was able to use volt generators to stun him, then he threw explosives at him. The jolt generated from the stepswitch would then temporarily stun him, leaving him open to attacks. Only then Fox had the chance to damage the King with explosive Fuel Barrels.

After completing this procedure four times, the RedEye King collapsed, then Fox attempted to remove the SpellStone. Before Fox could retrieve the SpellStone, the scurrilous tyrant King attempted one final attack, however Fox, with his keen reflexes, jumped to avoid the King's jaws and then he was successful in piercing the King's skull with the sharpened segment of Krystal's Staff, killing the tyrant lizard king.

To vanquish him, Fox needs to activate a series of volt generators around each square hallway; in order to electrocute the gargantuan carnivore. When the King RedEye topples over, Fox can then throw Fuel Barrels at his forehead four times. 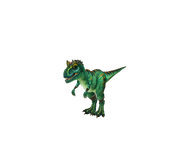 Krystal flees from the RedEye King in a promotional artwork.

The King RedEye's battle against Fox.

Fox attempts to claim his prize before finally slaying the largest dinosaur ever to walk Sauria.
Add a photo to this gallery
Retrieved from "https://starfox.fandom.com/wiki/King_RedEye?oldid=52716"
Community content is available under CC-BY-SA unless otherwise noted.