“Enemy Recon:
As you probably know by now, it's impossible to get a lock on Killer Bees, so try to stay near the centre of the screen and make small adjustments as you shoot. Besides racking up four hits, you may also receive a Shield Ring for your trouble.”
—

Killer Bees are starfighters that resemble bees, manufactured in the weapons labs on Macbeth and utilised by Andross's Empire during the Lylat Wars.

Hence then name, Killer Bees are fighters that strongly resemble the real Killer Bees. It's speed is fast enough to make the lock on feature of a combat computer impossible, and in addition, it fires various rainbow beams at its enemies. They can be heard with their distinctive engines as they approach the Arwing, acting as an early warning. Each time they fire their weapons, the create a unique sound of high pitched buzzing. If they are destroyed quickly enough and by hitting the Brakes after destroying one, more Killer Bees will keep appearing until the Arwing has reached a certain point in its flight path.

“Falco's support:
Weave back and forth to avoid the Killer Bee's laser. Zap it for a gold ring.
To Spyborg:
If you fail to open the warp, you'll head to the end of the sector. A Killer Bee flits in past the gate. Another Killer Bee will pop in from the right. Pop him for a Shield Ring.
All lasers, fire!
Blast the Killer Bee and get a Shield Ring reward. If you destroy the first bee in time, another will appear here. Take it out!”
—

Team Star Fox, during the Lylat Wars, encountered several Killer Bees in the deep space areas of Lylat, all of them in the Meteo asteroid field, Sector X combat zone, and Area 6 defensive sector. The Killer Bees were destroyed and their descriptions added to the service receipt.

Another type of Killer Bee appeared in orbit around Dinosaur Planet, acting as hostile detergents for Fox's Arwing to contend with.

Like most of the enemies in "Star Fox 64", Killer Bees reappear in "Zero", but without any changes to their name. 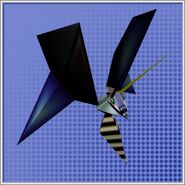 A Killer Bee, as they appear in Star Fox 64.