“Why are ships coming out of the base?”
—Slippy Toad

Invader I fighters were a class of star fighters used by Andross's army during the Lylat Wars.

Invader Is were slow, had a single laser cannon with a slow rate of fire, and despite being quite large, they had thin armor, and because of their huge size they were easy targets. On top of that, the pilots were quite unintelligent, as they are seen crashing into the hills of Fichina. This is also due to the ships being expendable, and each fighter pilot was expected to willingly give his life for the emperor, and to destroy or be destroyed. Because of these handicaps, they were no match for the Star Fox team. A common strategy for pilots of these fighters was for them to use at least two lead ships to draw fire, thus causing the pilot they are drawing fire against to be ambushed by another Invader I pilot.

“A common strategy for Invader flight groups is to use two or more lead ships to draw your fire. Once your attention is focused on the lead ships, another craft will drop in and try to ambush you from behind.”
—Offical Nintendo Power Player's Guide, pg 41

“Lock on and vaporize enemies as much as possible in this mission. You'll want to take care that the Star Wolf team doesn't shoot down any of your wingmen if you're going for a medal. Each of the Star Wolf team members is worth 10 hit points when you shoot them down, so you don't need to worry too much about shooting down a lot of drones.”
—Star Fox 64.com

They were first encountered by the Star Fox team during their recapture of the Cornerian base on Fichina. When the Cornerian base on Fichina had been overrun by Andross's forces, the Star Fox Team were instructed by General Pepper to liberate it from their clutches before Andross had a chance to use the top secret information stored there for his own evil ends. The Invader I ships were evacuating at full speed and en masse, something Slippy also noted and asked. ROB 64 revealed that they were evacuating because they rigged the base with explosives to detonate in order to prevent the Star Fox team from getting it back. Even with support from the Star Wolf team of space pirates, the Invader Is were downed and their destructions added to the Star Fox service invoice.

The Invader I on Fichina.

Invader Is leaving the base and divided in their evacuation by Star Fox.

Invader Is evacuate the base, just to be attacked by Star Fox.

Slippy asks why the Invader Is are leaving the base.

ROB reveals why the Invader Is are evacuating. 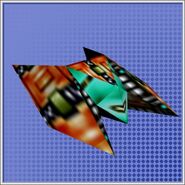 Invader I model from Star Fox 64.