The Homing Launcher (also known as the Homing Missile Launcher) is a very useful and powerful default weapon that appears in "Assault". It has an auto-lock feature and homing capabilities (hence the name). The Space Dynamics seal is on the barrel, pointing out they are the weapon's manufacturer.

The Homing Launcher can lock on to enemies by itself, so all that is needed to do is aim and fire the rocket. The Homing Launcher cannot target enemies who are using a Stealth Suit, but the blast itself will still do damage if it successfully hits the opponent. The launcher can be fired every two seconds after an initial launch, which makes it useful when fighting from a distance, though this can be a troublesome when firing at close range. The blast radius is very damaging to a pilot and any vehicles nearby, so great care should be used before making a shot.

“Homing Launcher: The launcher fires a projectile that zeroes in on its target. The homing launcher possesses a small amount of ammo.”
—Homing Launcher description on the official site.

“Homing launcher: Lock onto enemies, then fore a missile that will chase after the enemy.”
—Star Fox: Assault; Instruction Booklet 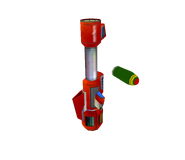 Falco Lombardi with the Homing Launcher