Grazan-class Carriers were large, heavily armored carriers used by the Venomian fleet at Sector Y during the Lylat Wars.

Described as being like a double-barreled shotgun, each Grazan was composed of twin hulls connected together by several struts which opened forward. Its compliment of fighter craft were launched from these open bays, while robotic battle suits were launched via catapults along the top of each hull. An array of energy cannons were positioned along the entrance of each launch bay, making the Grazan very dangerous head-on but significantly weaker from any other angle.

“The Grazan's dual hulls are open in the front like a double-barrelled shotgun. Aim your sights on these openings, but steer clear of them, because not only do they launch attackable armies of assault craft, but they also fire batteries of unstoppable energy bolts.”
—Official Nintendo Power Player's Guide, pg 61

“As you approach the Grazan battleship, target its openings, because fighters will catapult out of both barrels. Lasers simultaneously spew out, too, so quickly veer to safety. After the assault, you can fly either above or below the ship's deck. Both paths deal you the same enemies: a squad of enemy fighters. The fliers appear at the the end of the Grazan, so keep your lasers charged.”
—Official Nintendo Power Player's Guide, pg 62

A large force of Grazan carriers engaged the main Cornerian battle fleet at the Battle of Sector Y, along with an escort of the smaller Dorisby-class Battleships. The powerful Venomian ships proved themselves to be of greater strength than the Cornerian cruisers and frigates, as they swarmed over and destroyed up to half of the attacking Cornerian ships.

However, success did not last long for the Venomians, as at one point in that battle, the Star Fox Team arrived and assisted the losing Cornerian fleet. The Grazan carriers seemed like they would be more than a match for the handful of fighters, but they along with the large swarms of fighters and battle suits launched during the battle could not keep the Star Fox Team from penetrating their battle lines and destroying their flagship. 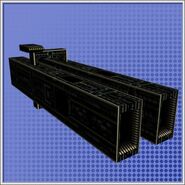 A Grazan deploys it's Triangle Fighters to hold the Star Fox team and Cornerian cruiser.

Dorisbys and Grazans attempt to hold Star Fox back, to no avail.

Concept artwork of Sector Y and Solar. Grazan carriers are prominent in the artwork.

A carrier brutally blasted in half by the Cornerian Army.