Granga Fighters are a class of starfighter, manufactured in the weapons labs on Macbeth and utilised by Andross' Empire during the Lylat Wars.

Granga Fighters are double finned, polygonal ships. They are very fast flying fighters, able to keep up the pace when tailing an Arwing, evident when tailing Falco's Arwing until his shield gauge depletes and forces him to retreat if he isn't rescued in time.

“In the All-Range Mode when you face the boss, Granga, you'll also encounter these swift, highly mobile fighters. They follow your team members closely and can be a nuisance, but if you concentrate your attack on Granga and destroy him quickly, you'll never even notice these gnats.”
—Official Nintendo Power Player's Guide, pg 27

After the checkpoint, three Granga Fighters will chase Falco. Destroy these three ships, and then fly through all of the arches ahead. Falco will lead you to an alternate path through the mission which will take you to a different lieutenant, and to Sector Y.

Granga Fighters make an appearance in the Lylat Wars Comic, appearing briefly on Corneria along with Tripods and Scout Pods, filling the similar role held in the games.

A Granga Fighter, as seen in the Strategy Guide.

Granga Fighters at Corneria City in the manga.

Falco being tailed by a trio of Granga Fighters.

A Granga fighter in the trailer of Star Fox Zero. 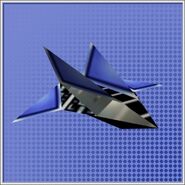 A Granga fighter model from Star Fox 64.
Add a photo to this gallery

Retrieved from "https://starfox.fandom.com/wiki/Granga_Fighter?oldid=54520"
Community content is available under CC-BY-SA unless otherwise noted.