Golemech is a mechanical guardian of a temple on Venom, essentially acting as a barricade to prevent entry into Andross's Palace. It is currently debated as to whether it was created by Andross, or if it was the lost Cornerius tribe's relic, which Andross just found during his exile. In "Star Fox 64", Golemech serves as the boss of the game's final Mission on Venom, specifically when taking the Easy Route via Bolse, as the boss is entirely missed when taking the Hard Route. Golemech also appears briefly in the "Lylat Wars Comic".

Golemech is a large ape-like construct with its weak interior protected by an outer shell of stone. The boss's name is a portmanteau of "golem", a living stone statue featured in many myths but originating in Judaism, and "mech", though "mech" usually refers to robotic vehicles that are operated by pilots instead of just robots like the Golemech, though it could also come from "mechanical". Its head is four sided (not including the top) with four emotions: Joy, Boredom, Sadness, and Anger. When it's outer-wear is removed, the head will glow red and spin, indicating a 5th emotion, desperation.

“Lylat Datalink; Evidence of a lost tribe?, pg 110
It is not known whether or not Golemech is something Andross created or something he discovered in the ancient ruins that dot the surface of Venom. Few archeologists surveys were sent to Venom before Andross took it over as his base, but Corneria University scientists believe that the legendary Lost Tribe of Cornerus did, indeed, inhabit Venom in the distant past. They also think it possible that Golemech is a remnant of the Lost Tribe's technology. Ancient texts state that the tribe eventually struck out into space to find a new home, but what became of them, no one knows.”
—

The Star Fox Team encountered Golemech at the temple just ahead of Andross's Palace, where the rocky titan acted as the final line of defence. Slippy Toad didn't understand what the giant was running away for if it were to be the last defence, as well as Falco warning Fox not to get too close. The escape was a distraction since Golemech was altering the tunnel behind it to try and lead the Arwing into hazardous obstacles to crash into, but the giant was not able to prevent the small, quick squadron of starfighters from peeling away it's hull with laser fire until the sensitive core was exposed which destroyed Golemech and allowed Star Fox to continue reaching the Ape Emperor.

Golemech appears briefly in the Lylat Wars Comic, having been impaled by Fox like he did Vulcain, while wearing an angry face.

Entrance to Venom's Ruins, where the Golemech resides.

The long corridor tunnel of the Temple.

Golemech in full detail and near perfect condition. 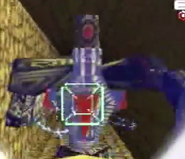