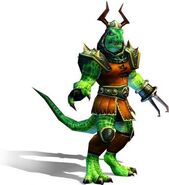 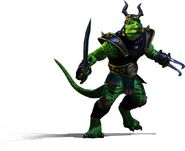 General Scales with alternate gear and his sword.

Scales's shadow on the box art of Star Fox Adventures.

Scales wallpaper from viral marketing.
Add a photo to this gallery

The ghostly imitation of General Scales during the Test of Fear.

Scales with his sword about to fight Fox.

Scales meets, chokes and throws Krystal off his galleon.
Add a photo to this gallery
Retrieved from "https://starfox.fandom.com/wiki/General_Scales/Gallery?oldid=44381"
Community content is available under CC-BY-SA unless otherwise noted.