The Gatling Gun is an uncommon, but even more powerful version of the Machine Gun in "Star Fox: Assault".

Each shot does more damage than the aforementioned weapon and can be used to defeat heavily-armored enemies such as the Purple Aparoids and Ape Soldiers wearing robotic mech suits, but the gun holds fewer rounds and is less accurate, making it a close-range weapon. The Gatling Gun is unlockable in Versus Mode by playing 20 VS. matches. The Gatling Gun is rarer than its weaker counterpart, making less common and less likely to be used. Some Spherical Tank Aparoids drop Gatling Guns behind as a reward for disposing of them.

The Gatling Gun is an effective room clearer in situations with densely-packed groups of enemies, especially when used in conjunction with a Barrier for protection. This makes it useful for Krystal because of her double barrier ability, which is probably why she is pictured with it in the official artwork. Also, in conjunction with the Booster Pack, one can punish nearby Arwings, though this is dangerous because of the Arwing's Charged Laser having superior range.

“Gatling Gun: A stronger version of the machine gun, the Gatling Gun will blaze with a serious rat-a-tat-tat when you hold the firing button. Be conservative with the ammo -- it is severely limited.”
—Gatling Gun description on the official site. 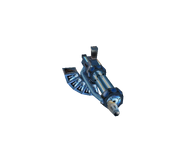 Krystal with the Gatling Gun
Add a photo to this gallery

Retrieved from "https://starfox.fandom.com/wiki/Gatling_Gun?oldid=54567"
Community content is available under CC-BY-SA unless otherwise noted.