“General Pepper's Flight Log, pg 26
Fox, the military situation on Corneria is deteriorating! Andross's advance forces have finally breached our defences and are assaulting the capital! We've held them back for as long as possible, but now we need your help! The main thrust of Andross's attack on Corneria is centred around the old army base in Corneria City. Approach the city through the southern canyon- this should give you the element of surprise. Take out all the fighters and ground forces. Beware of falling rubble from the buildings of the city, and watch out for berserk construction robots!”
—

Garudas are large construction robots manufactured in the weapons labs on Macbeth, deployed by the Venomian ground forces sent to Corneria by Andross during the Lylat Wars. Garudas appear in "Star Fox 64" and the 3DS remake as enemies on the Corneria mission, and are made famous for appearing in some promotional artwork produced for the N64 game, one of which was notably used on the sticker of the game cartridge for the N64 game release in western territories. Garuda robots return in "Zero", repeating their role as enemies on Cornerian Missions, and also on Zoness.

Garudas are large, vaugely humanoid, red/green/white robots which are armed with four clawed "hands" and roll around using tank treads as their method of travel. They have a blue "eye" on the front of their domes. Their colour motif is similar to most other Androssian lieutenant units, such as Granga's Mech.

“Garuda bots roll around the city, sometimes carrying huge beams from destroyed buildings. Look for them near structures, where they are about to cause havoc. Blast them early to prevent them from destroying buildings or throwing beams at your ship. You can earn up to fives hits for a Garuda.”
—Official Nintendo Power Player's Guide, pg 27

“The giant Garuda bot will push over the tower on top of the Laser Upgrade unless you destroy the bot first. From a distance, just as the tower comes into view, push the A Button to get a laser lock on the bot. if you blast it soon enough, it won't push over the building and you can swerve left to grab the more powerful laser.”
—Official Nintendo Power Player's Guide, pg 29

Since they were manufactured on Macbeth, they witnessed very minute of action during the war, but they were, however, deployed extensively on the Conerian Front, where their impressive stature and large cybertronic claws proved to be useful in performing actions such as topple buildings and hurl pylons.

The Forever Train on Macbeth, also carried Garuda units on its carts.

Garudas reappear in "Zero", repeating their antagonistic purpose and behaving like before where some throw pylons at the Arwing. On Zoness, Garuda robots that patrol the area around the sea base, this time are able to attack the Arwing on sight, by firing laser pulses from their clawed "hands". 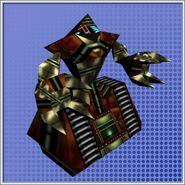 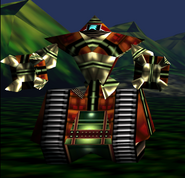 A Garuda on Corneria. 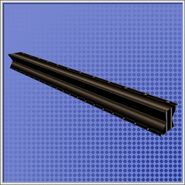 A pylon that the last two Garuda bots tend to throw.

A Garuda topples over a building.

Most Garudas ignore the Arwings, focusing on their destructive purpose.

A Garuda in action.

Garudas carried on the Forever Train.

A Garuda on the Star Fox 64 game cartridge. 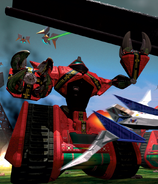 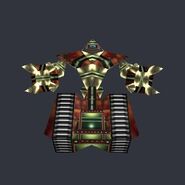