Galactic Rider is a transport vessel containing or producing an indefinite quantity of Air Bikers. It is encountered as a boss battle in the original Star Fox. The Galactic Rider appears during the Level 2 route to Venom's surface, situated on a highway of some sort. Upon destroying the Metal Smasher in Venom's airspace, the Galactic Rider can be seen escaping the vessel as it explodes, heading for Venom's surface.

This is the other weapon that escaped from the Metal Smasher, now it has the job to protect the back door of the Core Brain by sending the enemy bikers or even try to ram the Arwing with its back.

Staying on the right side of the screen if possible is advisable as the vessel will come from behind from the left. Its only exopsed area is the inside, which only comes when it opens its door to send the galactic bikers after the Arwing. Then it will try to collide with the Arwing on one side and the other before it opens its door again, therefore shooting the inside once its opens its door is helpful until it is destroyed. 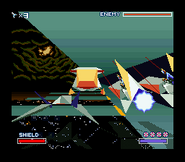