Force Field is a general term for protective shielding in science fiction. This technology has appeared in throughout the Star Fox series. An Arwing, Landmaster, Blue-Marine and Wolfen is able to generate a Force Field to repel most firepower when making a Barrel Roll.

The Meteo Crusher featured an absorbing Force Field, able to redirect attacking firepower back at the enemy starfighter. The Combat Robot Shogun was armed with an anti laser shield, yet too much laser fire could remove the shield. The Bolse Satellite was equipped with a Force Field generated by six energy towers, protecting its core and nearby fighters.

The Four GateKeepers Force Fields protect the four SpellStone lands when they are suspended in Dinosaur Planet's orbit. The Gold Rings will power them down (Fox McCloud can only collect them from space in his Arwing) letting Fox make a safe landing. If he doesn't get the amount of gold rings in order to make a safe landing, he won't be able to reach that certain area. Every area has a more powerful Force Field that will be a lot more harder for other ships to get there. The maximum amount of gold rings you can get is ten. Get all ten and you get bonus points. General Scales kept Sentinel class Sentry Bots with similar protective shielding on Dragon Rock and Krazoa Palace.

The Barrier item shrouds its user in a protective shield, lasting 30 seconds. The aparoid homeworld generated its own Anti-Laser Shield, guarding the entrance towards the tunnels where the queen dwelled. Only by Peppy Hare ramming the Great Fox into the shield was the Force Field temporarily disabled.

The playable starfighters are able to generate constant magnetic Force Fields depending on how good their Boost and Brake Gauge works.

The force field protecting the core of Bolse. Nearby fighters are given one wile the shield's towers function.

Fox encourages the ThornTail gatekeeper to open his Force Field, with help from the rest of the tribe.

Krystal's Staff can produce a Force Field to protect the wielder. Note how it is even strong enough to repel the crushing feet of the King RedEye.

The four SpellStone lands are held in Sauria's orbit by Force Fields, locked and guarded by their own GateKeeper. 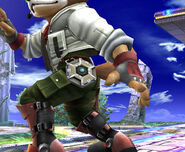 The Reflector device which produces a Force Field.

Falco now kicks his Reflector into his opponents. 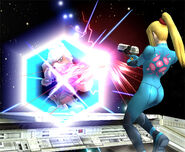 The Bolse Satellite's core and fighters are protected by Force Fielding.

A sentinel in the temple.
Add a photo to this gallery

Retrieved from "https://starfox.fandom.com/wiki/Force_Field?oldid=52882"
Community content is available under CC-BY-SA unless otherwise noted.