Flip Bots are automated drones presumably belonging to the forces of Andross, utilised at the Meteo Asteroid Field.

Flip Bots tend to gather in squadrons of four. Only the weak pointed, backside can be locked on which they will only expose to attack. Even then, they require multiple shots to successfully down them.

“Appearing in squadrons of four, the Flip Bots flip from front to back at different intervals, firing at you when they open up their back fins. When they face you, they're invulnerable. One shot into the open fins won't be enough.”
—Official Nintendo Power Player's Guide, pg 35

They were most prevalent in the Meteo Asteroid field. The Star Fox Team encountered them several times in the Meteo Asteroid Field, with them lying in wait when Fox manages to boost through two colliding large asteroids just before ROB 64 made contact to deliver a Supply Container. Another squadron ended up chasing Slippy Toad nearing the end of the campaign ahead of the Warp Rings. 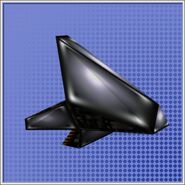 A view of the Flip Bot's inner core.