“General Pepper's Flight Log, pg 40
Our base on Fichina has been overrun by Andross's forces! We need to liberate it from their clutches before he has a chance to use the top secret information stored there for his own evil ends! Go to Fichina and scout the base, but be on the lookout for enemy fighters. Your old rivals, the Star Wolf team of space pirates, are also rumoured to be in the area, so watch your six! I know what Pigma Dengar did to your father, Fox, but don't let your emotions get the best of you!”
—

The Fichina Base is an important Cornerian military base located on Fichina, and one of three Cornerian federation owned constructions; the others being Fichina City and the Climate control center, as per the initial intention to covert the entire planet into another inhabitable neighbour for the Cornerian people. Top secret information is stored at the base which would be too important to lose to an enemy invasion force.

An immense hour-glass shaped building with three horizontal jettisons at the top as well as three entryways, the base is built with shields powerful enough to withstand even a Smart Bomb, and is ringed with a network of radar antennas as part of an early warning system by the military as well as monitoring local space traffic control. In addition, various pillars that were presumably minor office buildings as well as poles were in the general vicinity.

“This is the main Fichina base complex. It is heavily shielded, so you don't have to worry about damaging it with your lasers or even your bombs. Andross's forces have barricaded themselves inside, but you can bet that the unwelcome wagon will come out to greet you as soon as you show up on the doorstep.”
—Official Nintendo Power Player's Guide, pg 41

“Defeat the Star Wolf team before the sabotage bomb in the base explodes, and you'll take the path to Solar.”
—

“Recover our base from the enemy army!”
—

During the Lylat Wars, the Cornerian base on Fichina base ended up being occupied by Andross's Empire. Star Fox's rivals, the Star Wolf team of space pirates, were also rumoured to be in the area. Under the immediate request of General Pepper, the Star Fox Team arrived to liberate the Cornerian Outpost from the Venomian Force's clutches before Andross had a chance to use the top secret information stored there for his own evil ends. However, the Venomians anticipated this, and planted explosives within the base to destroy it, while evacuating in Invader I fighters. Despite Star Fox's massacre of the ships, the explosives were activated and a fraction of the bombs began to detonate. ROB 64 managed to uncover what the Venomians had done after Slippy noticed the suspiciously large amount of enemy ships leaving the base, but the Star Fox team was forced to delay defusing the bombs due to the Star Wolf Team's arrival. What became of the base after the war is unknown.

For the first two minutes, Invader Is will fly out of the base and are vulnerable to attack. After the certain conversation concerning the Invader Is leaving the base, the arrival of Star Wolf is triggered. Defeat the Star Wolf team before the sabotage bomb in the base explodes, but if the gameplay takes too long, a countdown will begin and last for just one minute. If Star Wolf is taken down before the bomb explodes, Fox flies his Arwing inside the base which is ultimately spared from destruction, and the flight route will be able to take the path to Solar. If Star Wolf and his cohorts manage to hold off Fox and his wingmates long enough for the bomb to explode, General Pepper will then order Star Fox to Sector X to take up the battle there, cancelling the choice of routes. 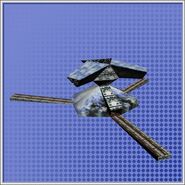 The Base in full detail.

The Base as first seen in the mission.

Slippy asks why Invader Is are leaving the base.

ROB reveals why the Invader Is were evacuating the base.

The Fichina Base as seen during Star Fox 64 3D. It now snows on the planet.

The Base as seen in early development.