EARTHWALKER - Soldier of the EarthWalker Tribe

“You should leave this place. Scales has brought a great evil into the palace.”
—EarthWalker Soldier

The EarthWalker Tribe is one of the two ruling tribes of Sauria, along with the CloudRunners. The EarthWalkers live within the Walled City, which is also the location to the fifth Krazoa Shrine and one of the lands where a SpellStone was forged. Only Earthwalkers could see the spirit of a Krazoa. They are also the sworn enemies of the RedEye Tribe and successfully captured them, keeping the savage dinosaurs and their King imprisoned under the main temple before they were released during the Plight of Sauria.

Members of this Tribe seem to be based off the Ceratopsia class of dinosaurs. The King Earthwalker and Prince Tricky seem to be Styracosauru. (Known for having a "Nose" horn, but no "Eye" horns.)

The Queen EarthWalker is based on a Protoceratops. (No horns at all.) The Guard EarthWalkers seem to be based on Triceratops, (characterized by having both the "Nose" and "Eye" horns,) but their overall appearance is closer to that of a Styracosaurus.

“One of two ruling times of Dinosaur Planet. Their great strength and speed have helped them grow into a respected family of Dinosaurs [though the CloudRunner may disagree].”
—Instruction Booklet

They were ruled by both the King and Queen EarthWalkers, but now the current ruler is Prince Tricky, who helped Fox McCloud restore peace to the planet during the Saurian Crisis. The EarthWalkers also seem to be in a disagreement with the CloudRunners as the two Tribes, stating they "do not see eye-to-eye". The exact origin of their rivalry is unknown, however, there are examples of EarthWalkers and CloudRunners putting this aside and working together in spite of their differences, as evidenced by the resistance group imprisoned on Dragon Rock having an EarthWalker and a CloudRunner as comrades.

It seems that they have a yin-yang philosiphy, as is seen in the Walled City, due to the sun and moon symbols. They also have a profound ability to see Krazoa and sense evil factors occurring, as they were the ones who sensed Andross when General Scales raided the Krazoa Temple, whereas Scales was oblivious to the Ape's presence.

The EarthWalkers might have some access to communications technology, as the King and Queen EarthWalkers were somehow able to contact General Pepper to thank the Cornerians for their tremendous help, despite the fact the planet seemed to lack the technology to communicate with other planets in the Lylat System. Similarly, the surviving EarthWalker army member at Krazoa Palace was responsible for sending the SOS signal that brought Krystal to Sauria in the first place.

Before his capture, the King EarthWalker left his GateKeeper's seal at ThornTail Hollow along with the Queen EarthWalker, while sending out an army to defend the Krazoa Palace, which was defeated by the SharpClaw army, although not before sending a SOS signal, as well as sensing the evil that Scales brought to the palace. Some lonely survivours guided a young girl named Krystal to help protect the Krazoa Spirits in their place, but this proved to be in vain when she was imprisoned by an unseen enemy.

General Scales then seized control of Walled City, freeing the RedEye Tribe and imprisoning the King EarthWalker under the main temple. The RedEye slaughtered their enemies in revenge, forcing the EarthWalkers to keep a safe distance. Fox McCloud and Prince Tricky arrived to assist in the recapture of Walled City and retreive another SpellStone.

An EarthWalker was also involved in a resistance movement against the SharpClaw, but it failed, and he ended up captured. He was also relieved that the resistance movement's leader, a ThornTail, managed to escape. He also aided Fox in his quest for the SpellStone, in exchange for Fox releasing his fellow resistance members from the camp: He aided Fox by ramming the shield generators and severely damaging them, thus leaving the SharpClaw's drones vulnerable to attack so the HighTop member can escape relatively unscathed.

By the time Fox vanquished Andross and brought Sauria back together, the King and Queen EarthWalkers were able to send word to Corneria, thanking them for all their assistance with the restoration of their planet, plus a quick "Hi" from the young prince.

At the time of the Aparoid Invasion of Sauria, Tricky became the Tribe's King. Although Walled City was the sight where Team Star Fox arrived to end the disaster, the EarthWalkers were nowhere to be seen. Peppy Hare was assured that Tricky managed to lead them to safety, to which Fox and Krystal discovered upon their reunion with him. With the Aparoid Queen destroyed, the Planet was saved by the Star Fox Team. 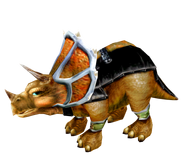 An early version of EarthWalker in development.

Some EarthWalkers. The one front-most, notably, is the Queen.

Krystal meets the EarthWalker that sent out the distress signal.