Adorned at the front with the Venomian Army's dictator, Andross's face, the cuboid-shaped warships were armed with two laser turrets located along the top of the ships, and supported enough armor to be practically invincible against even Smart Bombs. However the turrets, along with four bunkers situated in pairs along each side of the Dorisby, could be easily destroyed by starfighter-grade lasers, rendering the battleship impotent.

“Andross's mug adorns the front of the Dorisby. Even uglier are the ship's torrents that zero in on your Arwing. The Dorisby, like all battleships in Sector Y, cannot be sunk. However, it can be disarmed. Blast the turrets, and, for extra hit points, shoot at the black and yellow bunkers on the ship's sides.”
—Official Nintendo Power Player's Guide, pg 61

“The cannons mounted on the battleships easily elude your Arwings's targeting system, so you'll usually have to fly in fairly class in order to get a lock on the turrets. Such confrontational tactics make you an easy target, so rather than waiting to get a lock on your target, fire away and pelt the cannons with your lasers.”
—Official Nintendo Power Player's Guide, pg 62

A large force of Dorisby battleships engaged the main Cornerian battle fleet at the Battle of Sector Y. Despite being employed in large numbers, the ships failed to prevent the Star Fox Team from penetrating their battle lines and destroying their flagship, scattering the fleet in defeat. The Dorisbys were soon retired.

Dorisby battleships were seen in Sector α and Sector γ, both times trying to fight the Cornerian Fleet. Three Dorisby battleships also proceeded to flank the Salvadora, and were also involved in the fight on Corneria late into the war. 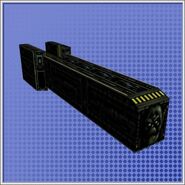 A trio of Dorisbys attempt to hold Fox by bombardments of laser fire.

Dorisbys and Grazans attempt to hold Star Fox, to no avail.

Concept artwork of Sector Y and Solar. A Dorisby battleship is in the lower left corner.

A Dorisby and Grazan attempt to hold Fox back with laser fire.

An entire line of battleships awaits the Star Fox team!

A Dorisby in Star Fox Zero.