“I feel a lot more confident with you around!”
—Dog Soldier

While the Cornerians are a wide variety of different anthropomorphic humanoids, Dog Soldiers are the main group which serve in the Cornerian army and Cornerian Defense Force, making up various sections of units such as the Bulldog and Husky Squadrons.

Defending the Lylat System and its capital planet Corneria against threats of invasion, they are led by General Pepper who is a Basset Hound, another species of Dog. Bill Grey, another Dog Soldier, is Commander to the Squadrons mentioned above. Captain Shears, another Basset Hound, was a high-ranking officer in the Cornerian army before his true allegiance was revealed.

Dog Soldiers were first seen during the Lylat Wars, where the Cornerian military was badly outnumbered and outgunned by the Venomians. The Dogs that survived the war, each gave a respected salute to the Star Fox team after their support proved invaluable.

When Oikonny's Rebel Army struck back at Corneria with vengeance, Dog Soldiers were thrust back into service, taking to combat the forces of Andrew Oikonny at the Venomian Fortuna Base.

This was short lived as the uprising of the Aparoid Race led to yet more catastrophic conflict, resulting in another devastating blow on Corneria City. Aparoid infection took hold on several Dog Soldiers and Cornerian Fighters, causing unwilling sacrifices. Dog Soldiers later assisted the Star Fox team in the defense of the Beltino Orbital Gate, led on by the Great Fox into the invasion of the Aparoid Homeworld. However, Aparoid Forces proved too strong for the Cornerians, forcing them to retreat at a 20% in casualties.

A Dog Foot Soldier. Several of these troopers were infected by Aparoid control.

General Pepper, Commander in chief of the Cornerian military.

Captain Shears, an officer in the Cornerian military.

Dog Soldiers that appear in the Star Fox 64 manga. 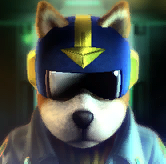 A Dog Soldier as they appear in Star Fox: Zero.