Direct-i is an analytical robot, tow cable deployed by Gyrowing pilots in Star Fox Zero. It is designed for exploration and does not seem to be suited for combat.

Direct-i is blue in colour. He has pincer hands and is about as tall as Fox McCloud is. His eyes are pink. He resembles the R.O.B. accessory, manufactured for certain Nintendo Entertainment System games, as well as a slight resemblance to ROB 64.

The Gyrowing is able to deploy Direct-i to hack into computer systems and fit into small places that the chopper cannot reach. It can also use Direct-i to pick up certain bombs off the ground and drop them on foes.

After the Zoness Mission is completed, Direct-i lends his hacking role to the Walker. However, redoing the missions The Key To Victory (at Area 3's Space Colony) and Covert Ops still has Direct-i available when Fox uses the Gyrowing.

“Slow-flying but agile hovercraft ship that can deploy a tethered robot, Direct-i, to gather items and hack into computer systems.”
—Star Fox Zero.com 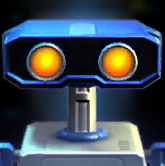 Retrieved from "https://starfox.fandom.com/wiki/Direct-i?oldid=53757"
Community content is available under CC-BY-SA unless otherwise noted.