“General Pepper's Flight Log, pg 60
Corneria's main battle fleet has suffered severe losses in Sector Y! A huge space battle has left our flagship crippled- or perhaps worse. Debriefed survivors have informed us about a new attack squadron of gigantic humanoid battle suits in the area. Although it may be too late to rescue our fleet from disaster, we need you to get in there and take out Andross's new iron soldiers! Their shields will deflect anything but a direct hit, so aim carefully! They are of course, accompanied by star fighters that will keep you on your toes.”
—

The Cornerian Fleet was the main battle space fleet who provided the backbone of the Cornerian space forces during the Lylat Wars and Aparoid Invasions of the Lylat System.

When the forces of Venom made their attack on Corneria, the Cornerian forces were unable to take them on alone and General Pepper sent out an S.O.S to the Star Fox team for support. During the course of the Lylat Wars, the main Cornerian battle fleet were stationed at Sector Y and engaged in a desperate melee with Venomian forces where they were crippled by a huge space battle and the flagship stranded. Surviving soldiers informed Cornerian Command of attacks made by humanoid battle suits, four of which managed to overwhelm, outgun and ruthlessly destroy the flagship, although at the cost of one of these battle suits. The fleet took heavy losses when Andross's latest inventions were employed en masse to devastating effect. Highly maneuverable and protected by thick physical shields plus wielding laser pistols, the robot troopers supported by the Dorisby and Grazan capital ships threatened to overwhelm the Cornerian fleet. Although it may have been too late to rescue the Cornerian fleet from disaster, the Star Fox Team were headed on by an S.O.S from General Pepper to storm the area and knock out the new iron soldiers of Andross. Star Fox arrived to back up the squadron and ended the battle by taking down the Saruzin flagship and the Cornerian fleet accompanied them until their next destination.

“In orbit around the planet Fortuna, the Cornerian fleet battles Oikonny and the remnants of Andross's army. Search out and destroy Oikonny's flagship by using an Arwing to navigate the battlefield. If Oikonny flees, follow him or shoot him down.”
—Mission 1. objective

The newly improved Cornerian Armada used ships that attended the battle of Fortuna against Oikonny's rebellion and formed battle formation V, breaking through Andross's ships and scattering them until the Cornerian Fleet were beaten back by Oikonny's reserved Stealth Squadron forcing the Cornerians to back down until the Star Fox team warped in to assist in ending the battle and capturing Oikonny.

“Everyone, heed closely what I am about to say. While you were on Sauria, a colossal aparoid armada appeared. The majority of the Cornerian defense fleet... was decimated.”
—

After encountering a bizarre alien called an Aparoid, the Cornerian research director Beltino Toad informed Star Fox about an incident seventeen years prior to the encounter where an entire Cornerian fleet was destroyed by just one Aparoid. Beltino claimed they were lucky enough to survive that trail but feared it was just a taste of what was yet to come. The Aparoid race started to invade the Lylat system in large groups, taking advantage of Team Star Fox's mission on Sauria to conquer Corneria. The majority of the Cornerian defense fleet was decimated by a colossal Aparoid armada, leaving Corneria city free to the invasion. Cornerian ships that survived the destruction of Corneria city or returned from other battles attended the protection of the Orbital Gate to allow the self-destruct program's completion, following Great Fox into the warp gate that led to the Aparoid Homeworld.

“I'm getting updates on the battle progress in the different areas. Grrr… I don't think I'm going to say I put up a very good fight. We've lost 20% of the fleet. We've no choice but to retreat. Listen up everyone! We've gotta breach this, we gotta!”
—

The surviving Cornerian Fleet then accompanied the Great Fox on the attack on the Aparoid's homeworld. Carrying numerous laser emplacements, the Cruisers could wreak havoc on enemy warships. Despite their preformance, they suffered heavy losses in attacking the Aparoid Homeworld. Peppy Hare reported that during the battle, 20% of the fleet had been lost, leaving them no choice but to retreat. The Cornerian invasion force returned to the Lylat system as soon as missing ships and personnel were searched out and recovered.

The Cornerian Fleet reappear in Zero, where they are engaged in a space melee with the Androssian fleet at Sector β. After all four Harlock-class Frigates were taken down by the Star Fox team and Bill Grey, the Granby came out of warp and the Cornerian flagship then prepared their main cannon to take it down, however the Granby's shields completely withstood the attack. Pepper then broadcasted to all available units to get through the Granby's shield, with Bill telling them to do this and Fox telling the general to leave it to him. Fox eventually managed to breach the shield while the Granby was busy firing and likewise reported this to the general. The commander then expressed shock that Fox could bypass the shield, before proceeding to order the crew to shoot Fox down immediately. Slippy then relayed to Fox that, per his analysis of the ship's structure, the shield generator was on the back near the top. Fox then proceeded to disable the force field preventing entry, and then proceeded to take down the attack robots as well as the shield generator. Fox then proceeded to flee the ship upon the shield being disabled as Pepper's flagship proceeded to prepare its main cannon, which promptly doomed the Granby. 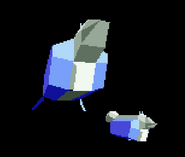 The Cornerian Fleet, as it appeared in Star Fox 2.

Shogun troopers in and amongst the Cornerian fleet.

The Cornerian ships over Sector Y.

The armada sends heavy fire to the enemy fleet.

The Cornerian fleet as seen in the Lylat Cruise in Super Smash Bros. Brawl.

Beltino's sorry story about an Aparoid that decimated an entire fleet.

The New Cornerian Battleship As seen in "Zero".