All except Star Fox Adventures

The Cornerian Army is one of the main military forces of Corneria, the purpose being is to patrol and protect the Lylat System from any and all assailants. It's led by General Pepper, whose forces are clearly made up of Cornerians, but mainly Dog Soldiers. Squadrons of this army have been dispatched to various areas of the Lylat System to keep the peace constant. This branch of the military is not to be confused with the Cornerian Defense Force, which deals with threats primarily on Corneria.

The Cornerian Army have at times been faced by overwhelming enemy numbers, causing General Pepper to summon the elite mercenaries for hire unit, the Star Fox Team, to provide backup support, for a price.

In their early lives, James McCloud, Peppy Hare and Pepper served together in the Cornerian military until James and Peppy moved to form the mercenaries-for-hire Star Fox Team with Pigma Dengar. At one point, General Pepper exiled the evil mad scientist Andross to Venom for conducting dangerous experiments that drove Corneria into a wasteland of near extinction. Five years after the exile of Andross, General Pepper noticed strange activity coming from Venom, sending the Star Fox Team to investigate. Pepper's worries were soon proven true when only Peppy managed to return home after his close escape from Andross's captivity, having been led into it by a trap set up by the traitorous Pigma.

Sometime after the incident of Pigma's treason, the Cornerian Army were quickly overpowered by the unexpected invasion of Andross's Empire. The Cornerian Army, during that time, had control over Corneria, Sector Y, Katina, as well as Fortuna (actually Fichina), and they usually managed to endure until Star Fox came to the rescue. Star Fox eventually took the fight towards the enemy homeworld of Venom, to end the oncoming invasion fleets and defeat the evil mad scientist Andross. Since Corneria's defense forces do not have a tank corps, the Star Fox Team's Landmaster was the only vehicle that could get the jobs done at Macbeth and Titania. Also, because of the rapidly spreading pollution in the ocean planet of Aquas, Cornerian Intelligence was unable to determine exactly what is happening on the planet, so Slippy's Blue-Marine experimental battle submersible was the only craft that descended to the depths and discover what Andross was up to on Aquas.

After the events of the war, General Pepper offered Star Fox special commission for their valuable services, with Fox McCloud politely declining.

Following Andross and his Venomian army's original defeats, the Cornerian Army had no need to contract Star Fox into action for some time.

Around four years after the Lylat Wars, one officer in the Cornerian Army named Captain Shears led a research expedition to a newly established base on Titania, to study ancient records. The ragtag team intercepted transmissions from Shears's forces, leading to their identities as survivors of the Venomian army, attempting to revive the fallen Ape Emperor Andross. At the cost of Falco Lombardi's position on the Star Fox team, the traitorous Shears and his unit were exposed and neutralised by Fox and the Hot Rodders, destroying the base and burying the Andross clone with it.

The Lylat System remained under close patrol by the Cornerian forces, until the separation of Planet Sauria came to General Pepper's attentions. Sending Fox to the planet's surface to investigate the Plight of Sauria, it was learned that Andross was the culprit behind the events, somehow surviving his defeat and was set on returning to destroy the Lylat System, instead of conquest. With assistance from a returned Falco Lombardi, Fox stopped Andross's plans to plummet Lylat into a second devastation.

One year after the incident on Sauria, the Cornerian Army were engaged in an vengeful attack force from the remaining Venomian forces led by the late Andross's nephew, Andrew Oikonny. The Cornerian Army at first were able to repel most of Oikonny's rebelling forces, until they underestimated the strength of his reserves and faced the brunt of Stealth Bombers. Following the inspirational arrival of the Great Fox, the Cornerian Armada gave the Star Fox Team time to pursue Oikonny's flagship. It was assumed that the remaining Venomians, like the Cornerian Defense Force, were almost entirely decimated trying to prevent the sudden Invasion of the powerful aparoids.

The ongoing war between the Venomians and Cornerians came to a halt when the Aparoid Invasion took place. It is taken into account from the research director Beltino Toad that around 17 years ago, an entire Cornerian Army fleet was decimated by a sole Aparoid.

The Cornerian Army's outpost base that rested on Katina was among the first victims of the Aparoid Invasion. During the Invasion of Corneria, General Pepper's personal Flagship was attacked and assimulated by Aparoidedation. Fox McCloud reluctantly resorted to shooting the possessed starfighter down, only for Pepper to be saved in the nick of time by Peppy.

A fleet of surviving Cornerian fighters and cruisers were assembled and followed the Great Fox into the attack on the Aparoid Homeworld. However, the aparoids provided too much resistance, forcing the Cornerians to retreat at 20% casualties. The invasion force returned to the Lylat system as soon as any missing ships and personnel were searched out and recovered.

Some years after the Aparoid Invasion, Corneria and the Lylat System were in a state of peace, until a new terrorist race called the Anglar Empire rose from the seas of Venom after the planet's patrols were postponed to counter the previous invasion.

General Pepper grew ill and passed his profession as general of the Cornerian Army over to Peppy Hare by the time of Star Fox Command, in which the lone army must once again attempt to defend Lylat from a rapid invasion from a new powerful enemy threat, the Anglars, although his true fate is unknown.

The Cornerian Military made appearances in the Nintendo Power comics, based on the original Star Fox title's continuity. More members are included such as General Pepper's Sergeant, who has a bad habit of bursting into a room without knocking. It is also revealed that Andross was the former Cornerian Army's head scientist, who was actually working behind enemy lines to "learn the ways of the enemy", while bearing a grudge towards them for the linked deaths of the Ape's foster parents.

The Cornerian Army make an appearance in the last page of the Lylat Wars Comic. Dog Soldiers salute the Star Fox Team like they do in the game, while General Pepper offers to make Fox the Cornerian Minister of Defense. Fox declines believing that they work better as a small quick group than an army. They announce that they need to get back to work and that Katt is waiting for Falco, but Fox promises that the Cornerian Army can always count on them.

While unseen, the original Star Fox game's manual makes reference to a Cornerian ruling council, who were responsible for Andross's exile after he ignored their many warnings.

They are mentioned in Star Fox: Assault Mission 7's loading screen briefing as the radar jammers disrupting communications between General Pepper and his commanding officers. After Pepper suffered at the hands of Aparoidedation and was taken into medical care, Beltino Toad had apparently assumed control of Cornerian Army action and refers to himself and Cornerian Command having done all they can before entrusting everything to Star Fox and the Cornerian fleet when they invaded the Aparoid homeworld.

Corneria Command appears in Star Fox Zero where Star Fox are required to protect General Pepper's tower against 10 Hits worth of enemies before Caiman calls a retreat. The Androsa fortress then appears and is set to demolish the tower unless Fox can down it after fighting Granga in the main reactor. Once the Androsa is destroyed, Star Fox depart towards their next mission as General Pepper watches them leave and salutes them for saving him.

A Cornerian Commander during the Aparoid Invasion, His rank is Adjutant. (his voice can be hear at the cutscene between the battle with Oiknonny).

Cornerian footsoldier during the Aparoid Invasion. Several of these soldiers were infected by the Aparoids during the invasion of Corneria.

General Pepper, commander in chief of the Cornerian Army. 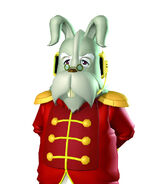 General Peppy of the Cornerian Army after Pepper's retirement.

Captain Shears, an officer in the Cornerian Army.

The surviving Cornerian Army in the Lylat Wars Comic.

A Cornerian supply vessel backing up the main fleet.

A 1st Generation Cornerian Cruiser in use during the Lylat Wars.