The Cloud Runner is a personal spacecraft used by Krystal. She based its appearance from and named it after the CloudRunners, a pterodactyl-like dinosaur tribe, making it lose all features of the Arwing's recognizable appearance. It is armed with a Twin Laser, Single Lock and one Smart Bomb and it has a two-second time bonus. When Krystal is asked by Slippy Toad how the ship is handling, Krystal responds with "I never thought that I'd be flying her again", which implies that the ship had been constructed long before Krystal was forced off the Star Fox team.

When the "Star Wolf Returns" ending is achieved, Krystal undergoes a change in identity and adopts her new alter ego, a bounty hunter named "Kursed", but still flies her worn out Cloud Runner ship.

Below are all the missions that utilise the Cloud Runner:

Splash screen for the Cloud Runner. 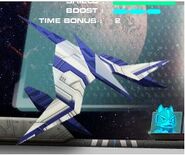 The Cloud Runner spacecraft, modified from an Arwing.

Krystal as her Bounty Hunter alter ego "Kursed", with her worn out Cloud Runner.

Krystal leaves Star Fox behind to be with Star Wolf full-time.

The Cloud Runner's specifications in the Pilot gallery.

Krystal Cloud Runner
Add a photo to this gallery

Retrieved from "https://starfox.fandom.com/wiki/Cloud_Runner?oldid=55031"
Community content is available under CC-BY-SA unless otherwise noted.