“Katt Monroe is an expert pilot and an occasional ally of the Star Fox team. The Cornerian military considers her a bit of a nuisance but acknowledges that she has been useful in the fight against Andross. Intel reports state that Katt was once ambushed- and her ship crippled- by an Androssian patrol, and that because of this incident, she has dedicated herself to Andross's defeat. Katt currently flies a heavily modified Invader-class fighter, dubbed The Catspaw, apparently stolen from one of Andross's bases. When asked about this by her close friend, Falco, Katt allegedly replied, "Just be glad I'm on your side, fly boy."”
—Lylat Datalink, Katt on the wing, pg 98

The Catspaw is a customised starfighter prototype piloted by Katt Monroe, after she stole and reverse-engineered an Invader III Fighter.

The Catspaw was an Invader III class starfighter, but it was stolen from Andross's Empire and heavily modified into its present state. Its capabilities are unknown, however, it appears to be capable of the same maneuvers Arwings are capable of including (but possibly not limited to) Barrel Rolls, Soumersaults, and U-Turns.

Before the Star Fox team arrived on Zoness, Katt was ambushed by a Venomian patrol squadron and her ship was crippled as a result. Because of this, she had a strong dedication to stopping Andross. She eventually managed to reverse-engineer an Invader III prototype that she had stolen from the Venomian Army, heavily modified into its present state, and called it The Catspaw. When Falco Lombardi asked how she got by this incident, Katt allegedly replied, "Just be glad I'm on your side, fly boy."

Since the attack made on her, Katt was no fan of Andross and his forces, so she helped the Star Fox team in raiding the oil refineries on Zoness, destroying the Weapons Factory on Macbeth, and defending the Great Fox from Copperhead missiles at Sector Z in hopes of crippling his defenses. Katt often flew beside and sweet-talking to Fox, in attempt to make Falco notice her, but he pretended not to notice.

The Catspaw is believed to either have been destroyed or outmoded by new technology, thus leading Katt to create the Cat's Paw 2, appearing in Star Fox Command.

In Star Fox 64 and the 3DS rerelease, Katt appears automatically on Zoness, just after saving Slippy from tailing Z-serpents and passing by the tower of items. The arrival of the Catspaw is triggered by Katt signing into the Communications Channel and the sound of Katt's fanfare. When the Catspaw performs Barrel Rolls, it sends off a trail of sparkles into the surrounding air. Shooting the Catspaw will cause Katt to react like any other allies. The Catspaw will help in taking down various Radar Buoys and enemy star fighters throughout the mission. Katt will be tailed by a chasing Bandit Fighter after passing by the second migrating Todora, which she will eventually shoot down herself but if she is saved she will flirt with Fox. After sinking the Sarumarine, Falco notices that Katt has disappeared. Depending on the next destination, the Catspaw will track Star Fox to their next mission by warping in at Sector Z in time to help protect Great Fox by dealing with the third wave of Copperhead missiles or appearing at Macbeth to shoot down fighters and hit certain track switches. If the routes to Sector Z and Macbeth did not include Zoness, Katt won't know where Star Fox had gone to therefore the Catspaw won't appear at all. The Catspaw will also appear in the aftermath of Fox's battle with Andross, if the route included Zoness, flying above Great Fox's rear top right near Falco's Arwing.

“The bird-like mutant creatures of Zoness are tough, but shooting them down will give you 6 points each, plus a bomb. When Katt Monroe shows up, be sure to fly ahead of her since you won't get points for the enemies she shoots down. After the Checkpoint, follow Slippy under the three platforms. As you go, bomb the barges to clear all the targets off of them. Towards the end of the mission, small flotillas of patrol boats will jet ahead of you. You can take out the complete fleet with a well-placed bomb.”
—Star Fox 64.com

Like the game, Katt flies the Catspaw in the Star Fox 64 manga. At Solar, after timebombs explode on Fox, Falco and Slippy's crippled Arwings and start to plummet towards the surface, Katt arrives in the nick of time to bring them up with her built-in tractor beam. Pigma Dengar and Andrew Oikonny then start to attack the Catspaw, but they in turn are assaulted by Wolf O'Donnell for acting without his approval. Katt then escorts the Arwings back to the Great Fox at the cost of a dinner from Falco. 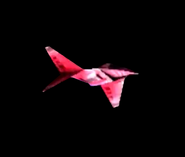 The sudden entrance made by The Catspaw.

The Catspaw in Star Fox Zero.

The Catspaw in Star Fox Zero.
Add a photo to this gallery

Retrieved from "https://starfox.fandom.com/wiki/Catspaw?oldid=53207"
Community content is available under CC-BY-SA unless otherwise noted.