Butterfly Fighters are a series of interplanetary deep space starfighters manufactured and assembled in the weapons labs on Macbeth and utilised by Andross's army during the Lylat Wars.

These fighters resemble butterflies, hence the name, but are not to be confused with the Killer Bees. These starfighters resemble the Tripod Fighter series. Butterfly Fighters are armed with laser cannons which shoot cyan plasma bursts rather than beams. They seem to resort to using surprise attacks, evident by their sudden appearances at the very beginning of the Asteroid Field campaign. Clusters of up to seven Butterfly Fighters appear near the warp zone rings where they blossom in tight formations, spinning tightly. Locking onto them and shooting a charged laser shot before they disperse will award an 7 HIT bonus and Fox's teammates will give out recognition for this successful feat.

“You can lock on enemies even when you can't see them. In this area, a squadron of Butterfly Fighters waits to ambush you. Target the asteroids ahead, and when you get a lock, shoot the hidden enemies.”
—Official Nintendo Power Player's Guide, pg 36

“The Butterfly Fighters blossom from tight formations of seven ships to wide, spinning circles. Lock on when they're still close together and you'll take out the entire formation worth seven hit points. If you're shooting for the warp, though, just ignore these fighters and concentrate on staying in the correct flight path.”
—Official Nintendo Power Player's Guide, pg 39

“The best way to get the medal in Meteo is to take the warp to Katina. To enter the warp, fly through the six warp gates to enter the warp zone. You will pick up speed after you go through each warp gate, so you will need to anticipate the positions of the warp gates and react quickly. The warp is filled with enemies and power-up items. Use bombs liberally because you can easily collect more in the warp area. When you reach clusters of items, do a loop to collect as many as possible.”
—Star Fox 64.com

Arriving instantly at the Meteo Asteroid Field, the Butterfly Fighters were hiding behind a path of asteroids, until the wise old Peppy Hare ruined their ambush after sensing something wrong with the overall quietness and the Arwing's combat computer able to lock on from behind the space rocks, making these fighters among the most tactical used of all the Venomians arsenal. More Butterflies were present at the Venom Air Defence Zone, where one tailed Slippy Toad just before Star Fox punched through the third line. What appeared to be blurry and distorted Butterflies appeared within the Warp Zones to Katina and Sector Z.
Butterfly Fighters reappear in "Zero" under the name: Attacker II.

Butterfly Fighters at the beginning of the Asteroid Field campaign.

Butterflies at the beginning of the Asteroid Field's path.

Butterflies near the Warp Rings.

Butterfiles in space, caught in the blast of a Smart Bomb. 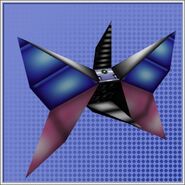