The Bullfrog is a modified version of the Arwing, and Slippy Toad's personal star fighter. It is equipped with a Plasma Laser, three Smart Bombs and a two-second time bonus, but it is slower and bulkier than other starfighters. It also has no lock on-capabilities. However, its heavy shields make up for its lack of speed and maneuverability. Therefore, it is very likely that the Bullfrog's role is that of a bomber.

Below are all the missions that utilise the Bullfrog:

Splash screen for the Bullfrog. 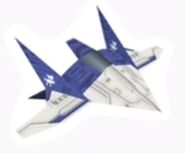 The Bullfrog appears as a Sticker in Super Smash Bros. Brawl. It allows the chosen character to carry a Bob-omb at the start of a Subspace Emissary level.

Retrieved from "https://starfox.fandom.com/wiki/Bullfrog?oldid=53201"
Community content is available under CC-BY-SA unless otherwise noted.