The Blade Barrier is a boss that appears in the Level 3 Asteroid Belt area of the original Star Fox.

While its three blades are spinning, they will deflect lasers back towards the player's Arwing (type B blasters, obtained by two successive Twin Laser upgrades, are unaffected though) so firing on the boss at this time is not a good idea. During the spinning sequence, the Blade Barrier will also fire a web-like attack which can trap the Arwing, allowing it to pull it in and deal damage. Avoiding the web is a simple matter of remaining on one side of the screen then dodging to the other side as it approaches, though if the player is hit then performing 2-3 barrel rolls will allow the player to break free before being damaged. Once the Blade Barrier stops spinning it will fire a trio of missiles from three of its six blue fins. Shoot at these fins to damage the Blade Barrier as well as to diminish its firepower. Eventually the blades start spinning again and the pattern repeats itself; once all six of the missile-launcher fins are destroyed, the boss is defeated. As it explodes however, the entire blade assembly will detach from the ship and be hurled at the Arwing; it does not deal much damage, but if the Arwing's shield is low then the player should avoid it.

The Meteo Crusher appearing in Star Fox 64 likely inherited the identical abilities used by the Blade Barrier, even appearing as the boss of the Asteroid Belt mission. 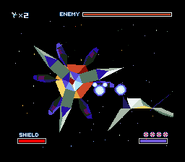 The Blade Barrier boss battle.
Add a photo to this gallery

Retrieved from "https://starfox.fandom.com/wiki/Blade_Barrier?oldid=47631"
Community content is available under CC-BY-SA unless otherwise noted.