Arwingpedia
Register
Don't have an account?
Sign In
Advertisement
in: Article stubs, Messy articles, Articles in need of images,
and 3 more

Astropolis is Andross's orbital space fortress, from Star Fox 2. It sits within the proximity of the Lylat System's sun. From this base of operations, Andross launched a massive attack on Corneria with several Cannon Betrayer Battle Carriers and coordinated the launch of several variety of interplanetary missiles, launched from occupied planets in the Lylat System.

Astropolis' only appearance in a game to date is in Star Fox 2. It is featured as the last level of the game, and as the location of the player's final battle with Andross. It is only accessible after all of Andross's forces elsewhere in the Lylat System have been annihilated.

Ultimately, the Star Fox team pushed Andross's forces back until at last, after defeating Wolf, they were able to launch an offensive on Astropolis. During the attack, one (or a second should the first fail) of the Star Fox team members infiltrated the massive space fortress. After diving deep into the interior and making their way through Astropolis's corridors, Andross himself was found at the core of the station. After penetrating a protective armored shell and damaging Andross's core brain, the villain fled into what appeared to be a warped pocket dimension, not unlike the one from the previous game in the series. Within, he was defeated by Star Fox, Astropolis's destruction triggered with the destruction of his core brain. Quickly, the Star Fox pilot fled the space station, escaping as Astropolis continued to explode from within. Losing inertial control, Andross's space fortress plummeted towards the surface of the sun below, obliterated in a sea of fire. Victorious, the Star Fox team returned to their mothership and warped away to Corneria to celebrate the second defeat of Andross and his armada. 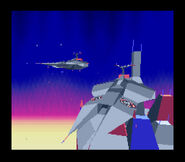 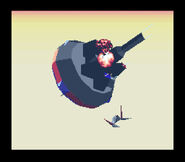 Astropolis falling into the sun of the Lylat System